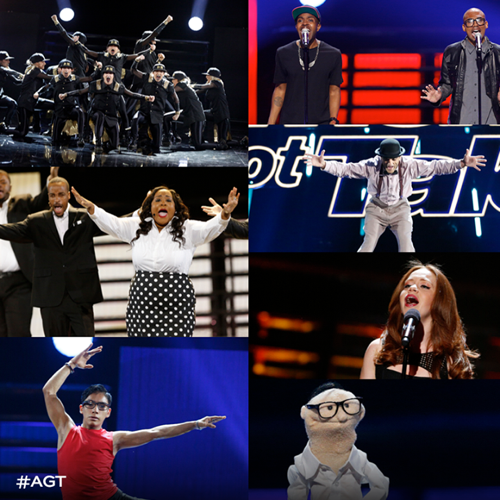 Tonight on NBC America’s Got Talent returns with an all new Tuesday July 22, Season 10 episode 10 called “Best of Auditions”. We’ve got your recap down below! On tonight’s episode a best-of look at Season 10’s auditions.

On the last episode, in the second week of Judge Cuts, Heidi Klum invited Grammy Award winner Michael Bublé to join the judging panel and gave him control of the Golden Buzzer. Did you watch the episode? If you missed it, we have a full and detailed recap right here for you.

On tonight’s episode per the NBC synopsis “we’ll be getting a look at the best auditions throughout the season 10 competition so far.”

#AGT is the best of the auditions tonight. Howie talks about AGT being 10 years old and how it’s bigger and better. Mel B says the contestants are better and Heidi says this is the best year ever. Howard says anything can happen in season 10. Heidi says this season is AGT on steroids. Howie says it’s more exciting than ever. Mel B says it’s souped up with crazier and more dangerous acts.

We see Freelusion, the video dance troupe. Then it’s DM Nation dance crew. Chapkis Dance Family is next and there’s so many of them. Then it’s Jalen and Olga of Freckled Sky with their technical director. There’s is amazing and Howard is so impressed. Val the director came out to take a bow too. Next is a look back at the hypnotist Chris Jones that got Howie to touch people and be less germ-phobic.

That got Chris through to the next stage but not Howie is nervous about volunteering. Mel B says every year is more talent. Heidi works with Xakary and cuts her in half. Then there’s Piff! Love Piff the Magic Dragon. He’s so funny and Mel B says he ruled the stage. The judges loved him and then it’s time for the comedians. Myq Kaplan was great then Ira the puppeteer.

Heidi says it’s the season of comedy. Howie says Drew Lynch’s audition was his most emotional. Howie slapped the golden buzzer for him to send him through to the live shows. Next we see a look at the Extreme Auditions. Metal Militia does their motorcycle routine and Howard loved them. Howie says Howard loves the danger acts. We then see the Dr Danger group and their explosions.

Then we get a look at Pyro Boy, Wally Glenn, who put fireworks on himself and was a human explosion. Howard says Wally is legally insane.

Now it’s a look at more dancers. Howie says he loves that they have people of any age doing anything they want. We see Heavenly Joy Jerkins. Howie says they are seeing amazing things out of younger and younger kids. She wowed the judges. Then we see Tao and Vard the May December dancing duo. Then we see Zach and Cameron kiddo dancing duo The Gentlemen.

Then it’s 87 year old Shirley Claire. She sang her heart out. Then Elin and Noah, dancing kids, also wow. 11 year old Arielle Baril rocked the house with her flawless opera number. Now it’s the gymnasts and flexible people. We see Showproject – the cute shirtless guys working on the exercise equipment was cool. Then it’s the two Validmirs who go by Duo Vladimir and they do hand balancing with knives.

Then we see Oleksiy – the guy with the mannequin he did contortions with. Howard says it was strange but they dug it. Howard talks about loving weird characters. Trizzie D is the next one we see – he’s the guy who smashed watermelons with his head. Uzeyer does his Chaplin ladder thing and gets raves. Howie says he thinks they’ve seen everything then something new comes.

Then we see the Regurgitator and his upchucking act. Next is Columbian Daniella Mass who sang a foreign language song. Then we see blind teen dancer Benjamin Yonattan. Then it’s singer Johnny Shelton performing the original song he wrote for the son he lost to cancer. Alex Boye’s band is next and they killed Taylor Swift’s Shake It Off.

Then Sharon Irving slayed with Hozier’s Take Me to Church. Alex Boye was moved to tears by the four votes he got to move on. We then see a montage of the judges voting yes, yes, yes for a variety of these wonderful acts. Mel B says this show is life changing – she says you win a million bucks plus get your own Vegas show. Mel B says she has the best seat in the house watching the best talent in the world.