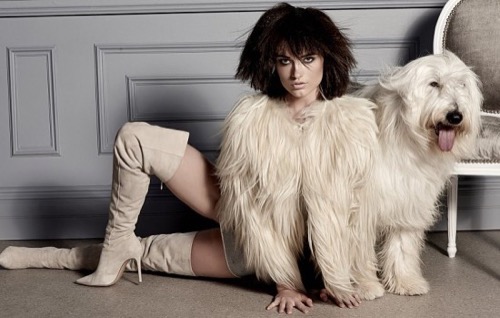 Tonight on CW Tyra Bank’s America’s Next Top Model continues with an all new Friday October 2, cycle 22 episode 9 called, “The Guy or Girl Who Came Back” and we have your weekly recap below.  On tonight’s episode the models attend go-sees at modeling agencies and are paired with a previously eliminated contestant.

On the last episode the models created a public service announcement in front of kids. At the photo shoot, the guys and girls posed as life-size dolls. Did you watch the last episode? If you missed it, we have a full and detailed recap right here for you.

On tonight’s episode as per the CW synopsis, “the models attend go-sees at modeling agencies and are paired with a previously eliminated contestant, who may earn the chance to come back in the competition.”

#ANTM starts after Lacey’s win for best photo. It’s her third best photo win and they are down to seven models in the house. Justin says everyone is becoming much more competitive. Hadassah says everyone underestimates her. Tyra offers a #tytytip to Lacey and says not to let the others get to her because they are threatened and tells her to enjoy the suite.

There’s Tyra mail and they find out they’re going to do their portfolio. Lacey says Devin is being arrogant and annoying. They go to Next Management and are told today’s challenge will see how they’ll work out in the real fashion world. They are partnering them up and then call in some past contestants that have been eliminated this season. They are told to pick an eliminated model to be their partner.

They are told one of the already eliminated will return to the house to take the place of whomever is sent home. Stefano hopes he can get back in the house. Lacey gets to choose first and takes Stefano. Nyle takes Delanie. Justin takes Dustin. Hadassah takes Ava. Bello is upset she didn’t pick him. Bello is picked last and his hurt about it. He calls the others frauds and that puts him with Devin.

Devin is not happy to have Bello with him. They have three hours to go see four go-sees. They race outside to meet their drivers. LA traffic is awful and they worry it will redrail them. Courtney and Monet go to the first loo-see. Lacey and Stefano make it to their first. They aren’t thrilled with Lacey. Devin and Bello are there at the same time as Hadassah and Ava and the girls get upstairs first.

The guys decide to go to another look-see instead of waiting. Justin and Dustin hit the look-see and the designer is excited with them. Nyle and Delanie are there next and Nyle gets high marks. Devin and Bello don’t do well at their first – one is short and one doesn’t walk right. Nyle is annoyed that Delanie keeps forgetting things which makes them backtrack.

Mikey and Ashley are at their third when Justin and Dustin show up and they run over Mikey and Ashley and do a walk. The designer says she wouldn’t book them because she didn’t get to see them in a suit. Nyle and Delanie can’t make it to the fourth because of her forgetting stuff. The teams are now rushing back to try and not be disqualified. Stefano and Lacey make it back first.

Mame and Courtney are running late. Everyone is clock watching and dealing with traffic. They are down to three minutes left and Bello and Devin get out of the car to run it. Devin is annoyed that Bello ran off and left him. Mame and Courtney are out of the challenge because they’re 14 minutes late. Mikey says the designers liked him and he booked three out of three and so did Lyle.

Hadassah takes the win. She wins an LA Fashion Week runway gig and some fashions. They send them all back to the house for the night. Next day, the models meet with Yu Tsai for an elimination challenge. They will share the spotlight in a photo shoot today with dogs. They are told they will pose with a dog that shares features with them. Yu Tsai is their photographer today.

Hadassah gets annoyed with him. They get mail and are told they meet with the judges tomorrow and seven will move on. Justin says it’s so stressful. Tyra tells the seven that one of them is going home and one of the eliminated will come back. J Alexander is there and Kelly Cutrone are with Tyra. They look at Hadassah’s best shot and it looks cool. Devin is next and they look at his shot. Tyra likes it.

Now they look at the eliminated. They tell Ashley her eyes look lost. They like Stefano’s shot and says it’s bad ass. Dustin has a great shot with the dog staring at his face. Tyra says it’s great head to toe. Courtney’s is fairy looking and Tyra says it’s magnificent. Delanie has a dancing shot. Ava did a cute little dog shot last is Bello who booked no jobs at the go-see. They love the dog photo though.

Tyra has one photo to represent the eliminated player that will return. She announces that Ashley had the lowest score. She is sent out. Next is Delanie who’s also sent out. Bella is eliminated. Next out is Courtney. Ava is out next. It’s Stefano and Dustin in the top two. Stefano is sent home and Justin is back in the house.

Nyle takes first and Haddasah is second. Lacey is 3rd, Mame is 4th, Mikey takes 5th. Justin and Devin are the last two. They are told one will not make the Vegas trip with Tyra and the others. They are going to Sin City next! Tyra counts down the score but we don’t see which of the guys is safe.