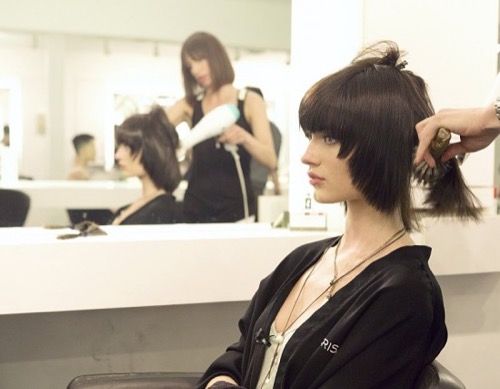 Tonight on CW Tyra Bank’s America’s Next Top Model continues with an all new Wednesday, cycle 22 episode 4 called, “The Girl Who Has a Close Shave” and we have your weekly recap below.  On tonight’s episode the models participate in an emotional photo shoot that honors war heroes.

On the last episode season the models took part in a runway walk on shipping containers raised high above the ground. Later, Tyra guided the models in a photo shoot where they are bound together. Did you watch the last episode? If you missed it, we have a full and detailed recap right here for you.

On tonight’s episode as per the CW synopsis, “the models participate in an emotional photo shoot that honors war heroes. Meanwhile, some of the girls and guys struggle to accept their new looks, with one of them locking herself in a bathroom.”

Devin won best picture last week and the haters were out in full force on tonight’s episode of “America’s Next Top Model”.

But you know how these things go. The fights start out as pretty childish and often there’s no actual reasoning why anyone is claiming to hate anyone else. Yet the drama begins to bubble up at the house and eventually it follows everyone to either a challenge or a photo-shoot.

And I think Devin was pretty happy about tonight’s challenge. A makeover was surely the one thing that could upset Hadassah. That’s right it’s Hadassah this week because she chose to make fun of his looks by implying he was a scarecrow.

So that’s when he called her stuck-up and full of herself. Yet she felt like she had never put that out there. And felt like her background was being used against her.

Hadassah was raised by a nanny and sometimes the others like to use that to mock her. However, as Hadassah explains it, having a nanny wasn’t all that great. She had to have one because her father was pretty much not in her life. So both Hadassah and Devin did hit out at each other’s most vulnerable spot.

And prior to their makeovers, there was a photo-shoot that required them to work their angles to their best advantage.

The models, you see, were going to be meeting everyday heroes such as members of our armed forces. And while they were moved to hear some the stories about the people they’ll be meeting (soldiers coming back stateside after losing a limb), some of them just didn’t know how to act on set. Devin just couldn’t follow advice until he was yelled at, Hadassah was too stiff, and Dustin had inappropriately broke down in laughter.

Thus, in a manner of speak, it was bad. Far too many people acted like they had no confidence in this ultimate confidence game. And if they can’t feel comfortable when they still look like themselves – makeovers were bound to break them.

And in case you’re wondering about who went on to cry first – of course it was Hadassah.

Yet she had every reason to. Hadassah if you remember was a pageant girl from Texas. So her hair was her crowning glory and, if this modelling thing doesn’t work out, the world of pageants is what she’ll be returning to.

And so, for her to hear that they’ll be shaving half her head; that could very well put an end to any future she could be looking at.

So Hadassah cried and Ms. J and Yu Tsai then did everything they could to reassure her that the cut wouldn’t be too bad. And that Tyra asked must have asked for it for a reason. Hence Hadassah did go ahead with her cut and, if I do say so myself, it wasn’t that bad.

She still looked nice and at least she wasn’t the girl that ended up with a mullet because mullets are suddenly chic now. And nor was she put in the position where she went from short hair to long hair like Stefano.

Stefano was given bangs and you could tell that he was uncomfortable with it. And that’s a problem with Stefano. He could be very expressive, especially when he’s set on picking a fight, and no surprise there that such behavior has already led to more than one argument back at the house.

But Stefano doesn’t seem to like he wants to interact with anyone at the house. He kind of put up a wall around himself and it later showed at panel. So Tyra and Kelly asked him if he had any friends at the house because they felt like he might be lonely at the house.

And naturally Stefano denied being lonely. Though his claim of just being an independent didn’t seem to explain his behavior.

So congratulations to Ava who won best picture on tonight’s episode but the bottom two weren’t that much of a shock. Hadassah and Stefano were in the bottom and that’s because they’re behavior didn’t match their talent.

It was one thing to have an attitude about your hair or if you feel like you’re better yet with not talent backing that up – there wasn’t a question about who was going to be put up on the chopping block. And though it was Stefano that went home this time – Hadassah won’t be too far off.