America’s Next Top Model Recap – Courtney and Bello Eliminated: Cycle 22 Episode 8 “The Girl Who Got All Dolled Up” 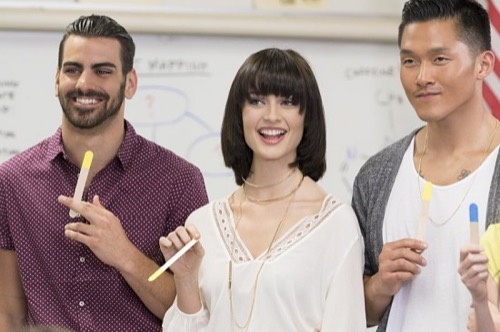 Tonight on CW Tyra Bank’s America’s Next Top Model continues with an all new Wednesday September 16, cycle 22 episode 8 called, “The Girl Who Got All Dolled Up” and we have your weekly recap below.  On tonight’s episode the models create a public service announcement in front of kids

On the last episode the models struggle during an acting challenge. Later, the guys and gals were paired up for a sexy commercial at the beach, but jealousy ran rampant and some chemistry fell flat. Did you watch the last episode? If you missed it, we have a full and detailed recap right here for you.

On tonight’s episode as per the CW synopsis, “the models create a public service announcement in front of kids. At the photo shoot, the guys and girls pose as life-size dolls.”

Lacey had the highest score on last week’s episode and so she won the keys to the Tyra Suite. However, before she could enjoy the fruits of her labor, she got her Ty Ty Tip of the Day.

Tyra warned Lacey that sometimes when she’s trying to pull of sexy – she’s actually coming off as sleazy. And that’s turning out to be a bit of mystery for the judges because they all know that she’s virgin yet frequently question the validity of that during panel. So Lacey now knows what she has to work on.

But speaking of improvement, Mikey seems to be changing without anyone asking him to. Ashley, as some of you recall, used to be the one to tell Mikey to calm down back when she was on the show. And well, since she’s been gone, Mikey has actually begun to make of more of an effort to change some of his behavior.

For one, he’s apologizing. He went to both Bello and Hadassah and told them he was sorry for his part in their past arguments. So he did admit he was at also at fault for what happened and once he did that they then reciprocated. They accepted his apology and they two appear to want to move on from before.

Thus the only one that Mikey still had an issue with after this sudden change was Courtney. With Ashley gone, Courtney thought she finally had a chance to flirt with Mikey. Only he wasn’t having it. He didn’t insult or disrespect her but he definitely showed that he wasn’t interested.

In his confessional, he said he thought of her as a sister.

Afterwards, though, he did voice some not very nice opinions about her when it came to their latest challenge. On tonight’s episode of “ANTM” the contestants had to create a six-second Vine video of why the STEM program was so important to stick to – especially for girls – and they had to incorporate their themes as well.

Team Blue had Power, Team Red was for Respect, and Team Yellow is Money. And Courtney was on Team Power along with Devin and Bello. So when Mikey of probably thinking of his friend when he said that carrying Courtney was going to be hard.

And it was. Bello and Devin struggled with Courtney and they also ran into technical difficulties. So what they were left with in terms of a Vine video was something barely made sense.

Thus they had the lowest scores of the competition.

However Team Respect ended up winning things by making their video funny enough to entertain. The celeb guest on tonight’s episode didn’t think their team would swoop in to win it all but they surprised her. They managed to fit in a lot in six seconds

So Courtney ended up feeling really bad for the part she played in their low scores. And as a way to make it up to Devin, she decided to throw him a birthday party. Devin was turning 22 and Courtney made sure to go all out for him.

There were balloons and even party hats. Yet, with a party, came a situation. Nyle had been feeling left out because no one was willing to sign with him and that feeling of exclusion only got worse when Devin borrowed his phone. His phone is the only way Nyle is able to follow most of their conversations and without it he just didn’t feel like being in a party mood.

But rather than let something likt that bring him down, Nyle came prepared the next day at the photo-shoot to beat Devin. Devin, according to Nyle, is someone that hasn’t grown in this competition and he’s already lagging at the bottom. So Nyle did want to get a better photo than him. Although he played when they were on set.

This week’s photo-shoot was all about the contestants being living dolls. They were each given a theme and the model had to become that themed doll. Yet Courtney struggled once again during her turn. It seems she didn’t know what a Fierce Fashionista was and had never seen a copy of Vogue.

Yu Tsai was still able to pull a photo out of her but it did take a lot out of him. And she wasn’t the only challenging model to shoot.

Both Bello and Devin were problematic. They didn’t know what to do with their hands and for a while there they struggled at remembering that they were dolls. So later at panel that did come back to bite them.

Bello could have relaxed some more, Devin could have been less fierce, and Courtney was told that she didn’t incorporate her theme well enough. So no surprise there about who landed in the bottom two but unfortunately Tyra chose this week to send two people home.