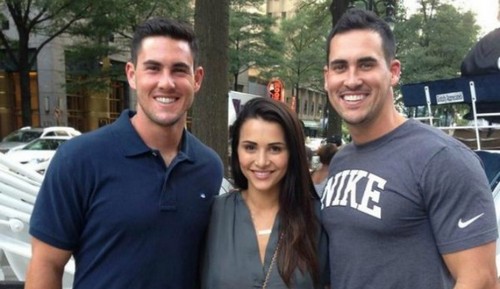 The Bachelor 2105 ‘Chris Soules Tells All’ episode featured a sobbing Andi Dorfman laying it on thick about her break up with fiance Josh Murray. The 2014 Bachelorette, Andi Dorfman, joined Chris Harrison last night on a special “Tell All” episode to discuss her break-up with her season’s winner, Josh Murray. Josh and Andi got engaged last Spring during the Bachelorette finale, and despite multiple reports based on exclusive sources from CDL about how much the couple was fighting – Andi and Josh continued their showmance and charade for several months. They even stepped out on the red carpet at the Season 19 premiere of The Bachelor in January 2015 and bragged to Chris Harrison about their upcoming wedding – and then they shocked Bachelor Nation two days later when they issued a press released confirming what we have been saying for months – they have broken up and gone their separate ways.

During The special “Tell All” episode of The Bachelor 2015, Andi Dorfman sobbed through an interview with Chris Harrison and explained just how “heartbroken” she was over their break-up, and what exactly happened to the self-proclaimed perfect couple. Andi confessed that she and Josh were “struggling” for a while, and explained “You know, we went to the live premiere and I think hearing people ask about wedding dates and seeing the other happy couples and people planning weddings, we had to ask ourselves why we’re not planning a date and people who were engaged after us have a date. That was very eye opening.”

After Andi’s interview, the Internet was flooded with Bachelor and Bachelorette fans who were “so touched” by Andi’s performance. And, that’s exactly what it was…a performance. Seriously, give that girl an Emmy! We aren’t cold-hearted, we seen her tears too, but we are also realists. Think about this for a moment, Andi Dorfman bragged in interviews and on social media for months about how perfect her relationship with Josh Murray was and how wrong the rumors of them breaking up were. That was a lie. Andi Dorfman showed up at The Bachelor premiere and bragged about how excited she and Josh were about their wedding – which she clearly knew wasn’t happening. That was a lie. Now, Andi is “devastated” and “feels like a failure,” why should we believe that is not a lie?

Sure, there is no doubt in our minds that Andi Dorfman is sad? She just kissed her showmance counterpart good-bye? Without Josh Murray, there is no Bachelor wedding and no Bachelor babies, Andi Dorfman is going to disappear from the spotlight just as quickly as she arrived – she will probably have to get a real job again! Do you think that Andi’s interview with Chris Harrison was sincere? Or is she just a really good actor? Will she disappear gracefully from limelight – or try to wiggle her way on to another reality TV show? Let us know what you think in the comments below and don’t forget to check CDL for all of your Bachelor spoilers and news.