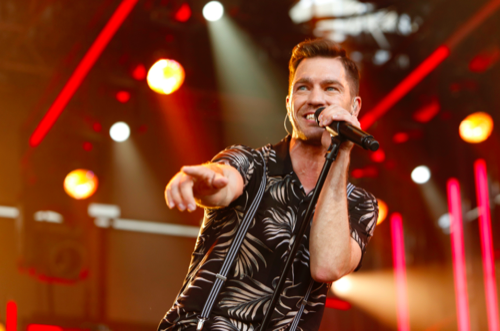 Tonight on ABC Dancing With The Stars returns for a seventh week and Andy Grammer and his professional dancing partner Allison Holker danced an Paso Doble routine to “The Beautiful People” from Marilyn Manson. On tonight’s episode the eight remaining couples will perform an individual Halloween-themed routine in addition to a competitive team dance.

Judges’ comments on Andy’s Week 7 Paso Doble: Bruno: “No question, full bite, full blood and full spunk. You went at it like a bat out of hell. But, you lost the shaping, you have to retain the Spanish flavor.” Carrie Ann: “I thought the same thing but I thought it totally worked.” Julianne: “I don’t know what this says about me, but I am extremely turned on right now. I have to be honest, I agree with Bruno, but it was still weird and awesome.”

Watch the video below and let us know what you think, do you agree with the judges comments? Do you think Andy did enough to avoid elimination tomorrow? Sound out in the comments and let us know your thoughts?