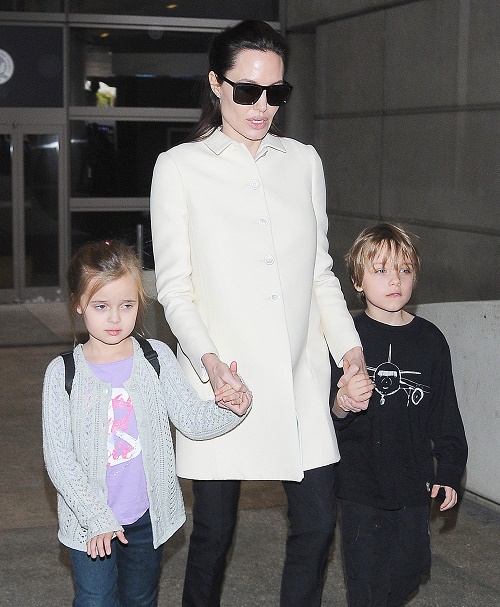 Angelina Jolie had held off on the final part of her breast cancer preventative surgery, even though she ended up getting the double mastectomy more than a year ago. However, a recent cancer scare at a doctor check up hastened the process, and Angelina finally had her ovaries removed. She’s already admitted that this will bring about premature menopause, even though she’s only 39 years old. However, she’s also admitted that if this is the sacrifice she has to make for her health, her future, and her children, it’s one that she’s happily willing to make.

Of course, that also brings us to the next point – Angelina Jolie’s career. She has very slowly drifted away from acting over the recent years, choosing to do only one or two high-profile roles every other year. She’s concentrated on her humanitarian and advocacy efforts more than her acting efforts, and has also started experimenting with directing as well. Plus, sources are now telling OK! Magazine that Angelina’s recent cancer scare has convinced her to quit acting altogether.

OK!’s source explains, “Angie had a real shock with this latest cancer scare. She loves her work, but it doesn’t come close in importance to her kids. She doesn’t ever want to be apart from them, even if it means putting her career on indefinite hold. For Angie, this is a no-brainer. She will go ahead with the projects she already signed on to, but after that, she’s pulling back. She is taking a real break from the craziness of her life to finally just be a mom and wife.”

Again, this is something that Angelina Jolie had already admitted, and no doubt, the cancer scare only hastened that. I’m guessing that she will formally quit acting after that long-gestating Cleopatra biopic finally comes to the big screen, but until then, I don’t think Angelina’s leaving her film career just yet.