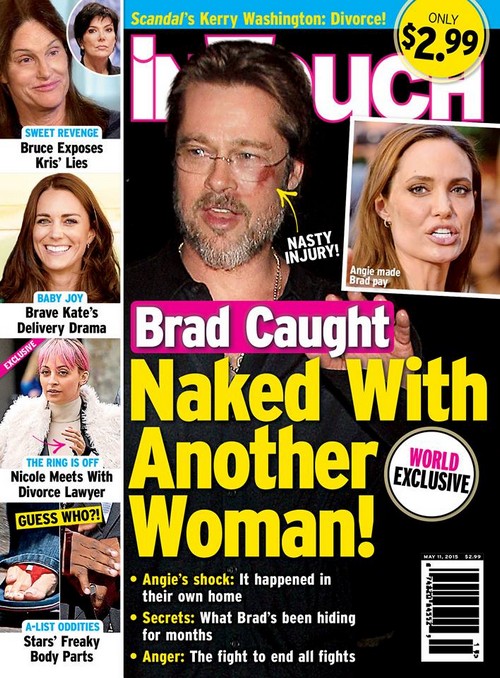 Brad Pitt and Angelina Jolie will never, ever stop being interesting for the tabloids. For example, the latest cover issue of In Touch Weekly claims that Brad Pitt was caught cheating naked in bed with another woman, and it also insinuates that Angelina Jolie and/or this other woman was responsible for his nasty cheek injury – despite the fact that Brad already revealed that it was due to flip flops.

Apparently, the ‘incident’ happened in Brad and Angelina’s home, and Angelina made Brad ‘pay’ when he found out. Plus, Brad has apparently been hiding ‘secrets’ for months, supposedly to do with this cheating, and they then had a ‘fight to end all fights’.

If we believed every tabloid report about these two, we’d assume that Brad Pitt and Angelina Jolie get into fights literally every other day. But obviously, they have better things to do, even if the tabloids don’t. Plus, Angelina’s too busy pleading for Syrian refugees to the UN right now, and Brad is in pre-production on various different projects. And if you add the fact that they have to wrangle six kids wherever they go, you think Brad Pitt has time for cheating or ‘secrets’?

Then again, he is a movie star – and they have endless resources at their disposal to keep such a ‘secret’. But you think he’d be stupid enough to hook up with another woman in his home? Definitely, definitely not.

What do you guys think about Brad Pitt being caught naked with another woman, supposedly in his home with Angelina Jolie? Do you think it happened, and do you think Angelina was the one who caught them? Or is this story too hokey to be real, especially with Brad being stupid enough to cheat in his home as opposed to a hotel or another location? Let us know your thoughts in the comments below.