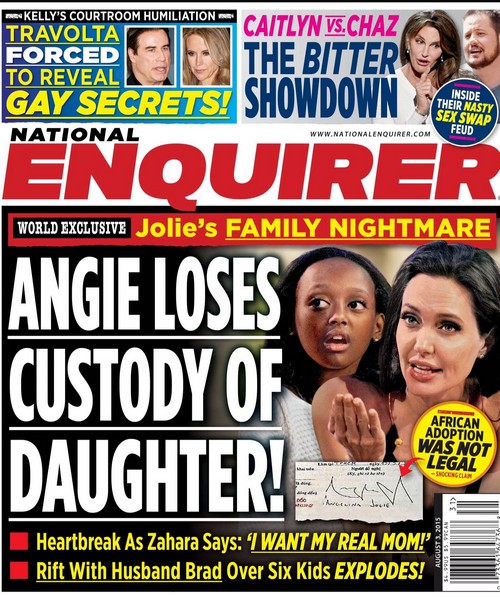 Is Angelina Jolie going to lose her adopted daughter Zahara? Brad Pitt and Angelina Jolie are reportedly on the verge of a divorce – the couple has been fighting like cats and dogs for months. According to a bombshell new report from The National Enquirer, one of the issues that is tearing Brad and Angie apart is their 10 year old adopted daughter Zahara. Angelina is a basket case, and making everyone in the Jolie-Pitt house’s lives a living hell because she is scared that Zahara’s birth mother could take the child back, and Zahara wants to go!

Angelia Jolie’s adoption of Zahara when she was just six months old has always been surrounded by scandal and controversy. Zahara was malnourished and on her death bed when Angie brought her back to the US, and nursed her back to health. It was originally reported that Zahara’s 18 year old mother died from AIDS, so she was an orphan. However, after the adoption had been finalized Zahara’s mother Mentewab Dawit came forward and revealed that she had not died, and her family gave her daughter away to be adopted because she ran away from home and they could no longer care for her.

There has always been doubts about the validity of Zahara’s adoption after it was revealed that her birth mother was actually alive – and now that Zahara is older, she keeps telling Angelina that she wants to go home to Ethiopia to live with her “real mother.” That’s not unusual for adopted children, but it is concerning for Angelina since Zahara’s mother is very much alive – and it is unclear whether her adoption is even legitimate.

Brad and Angelina can’t seem to see eye to eye on how to raise their six children. An inside source dished to National Enquirer, “The kids flipped out when Vivienne landed a role in her mother’s film “Malificent.” Yet another bone of contention is that Shiloh has been tagging along with her mother on humanitarian work around the globe. Brad believes that Angie may be putting Shiloh in danger by taking her to refugee camps. Add this to Zahara’s desire to return to Ethiopia and it could set off the fight to end all fights.”

It really is no surprise that Brad and Angelina are caving under the pressure of raising their six very different kids. But, a divorce is just going to make matters worse and damage the kids even more. Do you think that Angelina could lose her daughter Zahara after raising her for 10 years? Could the strain of Zahara’s adoption situation cause Angelina Jolie and Brad Pitt to break up? Let us know what you think in the comments below!