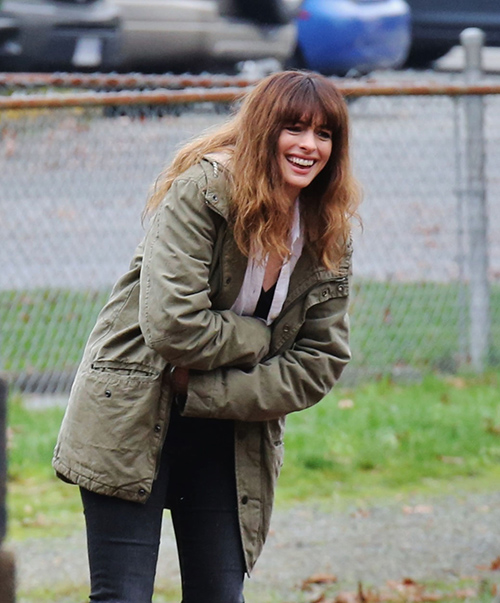 Anne Hathaway is pregnant with baby number one! Since the Oscar-winning actress and her husband Adam Shulman got married and said “I Do” in 2012, rumors have been popping up left and right that Anne was pregnant or trying to get pregnant. At one point, there was even reports out that Anne Hathaway had banned everyone around her form even bringing up the topic of her having a baby because she and Adam were having difficulties getting pregnant.

In September 2015, Anne Hathaway once again fueled baby rumors when she stepped out with what appeared to be a tiny baby bump on the red carpet at her movie premiere – the actress and her husband Adam Shulman refused to comment on the rumors that they had a baby on the way. This week, photos were snapped of Anne with an obvious baby bump in Beverly Hills – and she made a bizarre joke on social media about diaper rash.

In case you needed anymore convincing, E! Online’s inside sources are now confirming that the actress is pregnant with baby number one and she and Adam Shulman have a son or daughter on the way. An insider dished to E! Online, “Anne is in her second trimester and feeling great!” It’s no secret that Anne has wanted a baby for quite a while. Back in 2013, she raved in an interview with Vogue Magazine about how desperately she wanted to have a baby. Hathaway stated, “Oh, my God. I want to be a mother, and I anticipate loving my children quite fiercely. I think about it all the time, though it’s a silly thing to think about because the kind of mother I’ll be depends on the kind of children I have. I can’t wait to meet them.”

It looks like Anne Hathaway’s dreams have finally come true. Congratulations to Anne and Adam Shulman on their growing family!