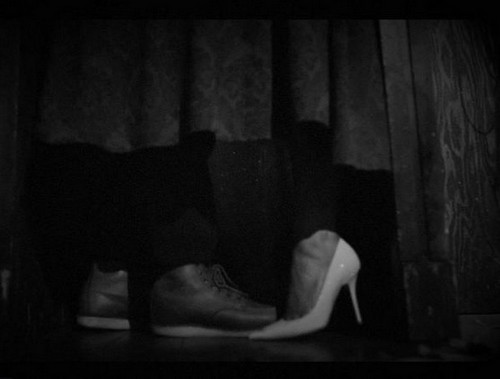 Ariana Grande has a secret boyfriend – and the Internet is going crazy trying to ID him. It all started earlier this week when Ariana Grande posted a cute photo of her feet and a guys’ feet – they appear to be leaning in to each other like they are kissing.

Grande captioned the photo, “the sun is setting and you’re right here by my side.” Super cute and romantic, right? Well, as soon as her eagle-eyed fans began speculating about who Ariana was dating – Ariana deleted the picture!

At first glance, fans assumed that the man kissing Ariana Grande was Ricky Alvarez – her back-up dancer that she was linked to in July when she was caught on surveillance video at the infamous donut shop kissing him.

Then, Ariana even took him along as her date to the 2015 Video Music Awards, and they had a little PDA session in September. Ariana and Ricky hadn’t exactly made their relationship official, but they weren’t hiding it either. So, why would Ariana not show his face in the picture, and then delete it?

Of course, there are also those hopeful fans that have spent the last three days googling pictures of Justin Bieber’s shoes in hopes to match them to the mystery boyfriend’s shoes in the picture. For years now rumors have been floating around that Ariana and Justin Bieber are secretly hooking up, and now that they are both single at the same time and reportedly going on tour together next year – the rumors have been really heating up.

Then again – for all we know, those might not even be Ariana’s feet, she may have just borrowed a cute picture of the internet and then deleted it when her fans went in to an uproar trying to figure out who her secret boyfriend is. What do you guys think, does Ariana have a secret boyfriend? Or is she still dating Ricky Alvarez? Whose feet are in the picture?! Share your thoughts in the comments below!