Bachelor in Paradise: After Paradise Recap – Ben Higgins The Next Bachelor: Season 1 Episode 4 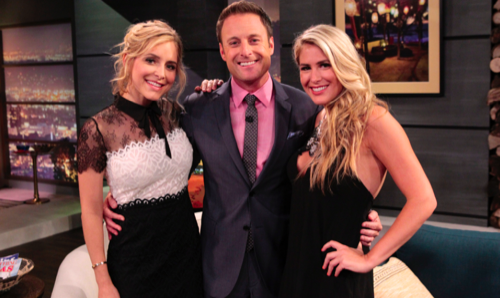 Bachelor In Paradise: After Show airs tonight on ABC with an all new August 24 season 1 episode 4. We’ve got your recap down below! On tonight’s episode cast members and celebrity fans discuss episodes of “Bachelor in Paradise.”

On the last episode Guests joining the discussion of the latest “Bachelor in Paradise” episode included actor Jason Biggs and director James Gunn.  Did you see the episode?  If you missed it we have a full and detailed recap, right here.

On tonight’s episode per the ABC synopsis “guests joining the discussion of the latest “Bachelor in Paradise” episode include TV host Michelle Collins and contestants Dan and Joe.”

Tonight’s episode is going to have people talking and you are not going to want to miss a minute of it. Bachelor In Paradise: After Show airs tonight at 8PM so don’t forget to come back for our live recap!

Tonight’s episode of After Paradise kicks off with hosts Chris Harrison and Jenny Mollen, the new View co-host Michelle Collins is also joining the tonight. The first Bachelor In Paradise star to take the stage tonight is Dan Cox, apparently Michelle insisted that he sit next to her on the couch. Michelle takes out a rose and gives it to Dan and says that he is hands down the “hottest guy in paradise.”

First, Chris Harrison wants to discuss Joe’s breakdown over Samantha dumping him. Dan confirms that the whole thing was super awkward for every one on set. Dan thinks that Joe is a little insecure, and he treated women badly because he was unsure of himself. When Dan saw the episode of The Bachelorette where Kaitlyn Bristowe dumped him – and he says that was the first time that he saw “evil Joe.” Chris has Kaitlyn on the phone, he wants to know what she thought of Joe when she was dating him. Kaitlyn says that she thought he was a great guy until she dumped him and then he “flipped a switch.”

Now, it’s time to take a few fan’s calls. A fan named Catherine calls in and says that she was devastated when Dan and Ashley S. broke up – she thought that Dan was the perfect guy to handle Ashley’s craziness. Dan explains that at the end of the day they broke up because they weren’t compatible, it had nothing to do with her being crazy.

It’s time for Joe Bailey to take the stage and discuss his behavior on Bachelor In Paradise. Chris shares a clip called “The Evolution of Joe.” He started off on The Bachelorette as being romantic and sweet to Kaitlyn – he even told her that he was falling in love with her. Until Kaitlyn dumped her then he turned “cold” and became a total villain in Mexico. He played Jeulia, disrespected Jonathan, and then went bat shit crazy when Samantha dumped him.

Chris starts off the interview by asking joe what he thinks of his behavior in paradise. Joe explains that he was heartbroken when Kaitlyn dumped him, so Samantha was a rebound and they texted every day for a month and a half. Joe explains that Samantha told him to “do whatever it takes to get a rose.” Joe admits that he is ashamed when he saw the show, he says that what he did to Jeulia was unforgivable. He regrets not giving Jeulia a “fair shot” because he was obsessed with Samantha.

After Joe issues a public apology for how horrible he behaved on Bachelor In Paradise – Chris Harrison won’t let him off the hook just yet. He asks Joe why he was acting so crazy. Joe explains that everyone acts out of character when they like someone, he had such tunnel vision when he was in to Samantha that he didn’t notice what he was doing to other people.

Michelle asks Joe why he did Jonathan Holloway so dirty though – he made him cry and then apologize to him when he didn’t do anything wrong. Jenny isn’t buying Joe’s explanation, she points out that Joe hadn’t even met Samantha yet and he was already being a total douchebag – so it couldn’t have been all tunnel vision. Joe wants to make sure that everyone realizes that Samantha never admitted to doing anything wrong – and she didn’t apologize to anyone because all she cared about was her image. Jeulia takes the

After Paradise stage next, just so that Joe can apologize to her face to face and she can confront him over everything that he did to her.

Now, it is time for Chris Harrison to introduce the 2016 Bachelor – Ben Higgins. Ben sits down with Chris and raves about how amazing an opportunity it is to find love on the ABC dating show. He jokes that he is prepared for it after his stint on The Bachelorette. Amy Schumer calls in to give Ben some advice about being the next Bachelor – Amy jokes that her advice is “don’t do it.” Then, she asks The Bachelor if he wants to have phone sex on the air, he politely turns her down and says that they will talk later. Chris wishes Ben the best of luck as The Bachelor, and more fans call in to rave about how excited they are to see him on the show.