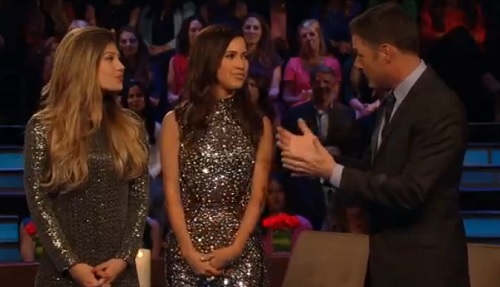 Bachelorette 2015 spoilers tease that the Season 11 premiere of the reality TV dating show will air on ABC on Monday, May 18 – and unlike any previous season, there will be not one but two Bachelorettes: Kaitlyn Bristowe and Britt Nilsson. Spoilers are already rolling in for Episode 1 of The Bachelorette, and from the looks of it, fans will not want to miss a single second of the premiere! According to Bachelorette 2015 spoilers, the premiere will kick off with limo-entrances like you have never seen before.

The limo entrances on The Bachelor and The Bachelorette are always painfully awkward to watch, yet too entertaining to look away, it’s like a train wreck in slow motion. According to Bachelorette 2015 spoilers, the Season 11 premiere will feature the most excruciating limo-entrances in the history of the show. 25 eligible Bachelors will arrive at the mansion; however, when they climb out of the car, they will be faced with a dilemma. Instead of one Bachelorette standing before them in a glittery ball-gown, they will see both Britt Nilsson and Kaitlyn Bristowe. And they will have to decide which woman they want to introduce themselves to first…awkward.

According to Bachelorette 2015 spoilers, after the painfully awkward limo-entrances, which include a man riding in on a cupcake and the typical horrible dancers and singers, coupled with one strange man sucking helium out of balloons, Britt and Kaitlyn will head inside with the 25 guys for the cocktail party and meet and greet. Episode 1 spoilers reveal that at the end of the premiere the 25 guys will each walk in to a room with a ballot box – and have to vote for whether or not they want to date Kaitlyn Bristowe or Britt Nilsson. And, here’s the kicker, fans will not learn which woman has been selected to be the official Bachelorette until part 2 of The Bachelorette premiere, which is set to air on Tuesday, May 19.

So Bachelorette, fans are you as excited as we are for the 2015 premiere? Do you think that it is wrong to give the guys the power to choose which woman they want to date? Let us know what you think in the comments below and don’t forget to check CDL tomorrow for more Bachelorette 2015 spoilers and news.