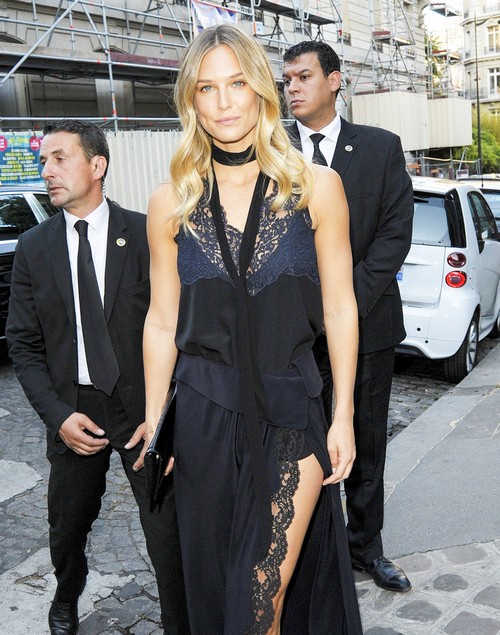 If you thought Bar Refaeli’s love life couldn’t get more ridiculous than when she dated chunky over-rated actor Leonardo DiCaprio, wait for this. Bar has landed herself a decade-older sugar daddy who stands to inherit the family’s Israeli food business, Neto. But that’s not the headline. The big news is that Bar Refaeli got engaged to her sweetie and fellow Israeli Adi Ezra and their extravagant wedding is messing up the airways in Israel.

The Thursday, September 24 wedding of the duo will take place at the Beresheet Hotel in Carmel Forest in Haifa, Israel. That sounds lovely, except that the supermodel is also claiming rights to the airspace above the wedding site. This is where the set-up for their nuptials get out of hand. Their wedding plans include filming the ceremony from above via a hot air balloon and drones. Yes, you heard it right, Bar Rafaeli is droning her own wedding.

Don’t people usually want to avoid having their wedding droned? Anyone watch Homeland, hello? And if you want to drone you wedding, good on you, but you shouldn’t annoy others with your extravagant plans. Bar Refaeli and Adi Ezra have used their influence to get the Israeli Civil Aviation Authority to shut down the air space above their wedding for an incredible nine hours. It’s 1.5 square miles of airspace which, percentage-wise, would be like shutting down 600 square miles of US air space.

One of the pilots affected by the closure said, “Closing public air resources because of the request of a celeb who wants privacy is like closing the Ayalon Highway because a celeb doesn’t want one of the cars on the road to photograph him at home.” For reference, the highway he mentioned is the largest freeway in the country. The authorities involved in the closure cited safety concerns related to the unmanned aircraft being launched as part of the wedding.

But, come on, would anyone else be able to get away with this sort of intrusiveness into public transportation paths? While not much else has been revealed about their wedding plans, one thing is for sure – no matter how indulgent the wedding is, don’t count on a certain mega rock band to perform – specifically the Rolling Stones. Turns out Adi Ezra dumped Bar Refaeli at one point in their relationship over cheating allegations with Stones front man Mick Jagger, but they later made up.

And now they get their happily ever after starting with inconveniencing an entire swath of the country just so they can have their way. Mazel Tov!