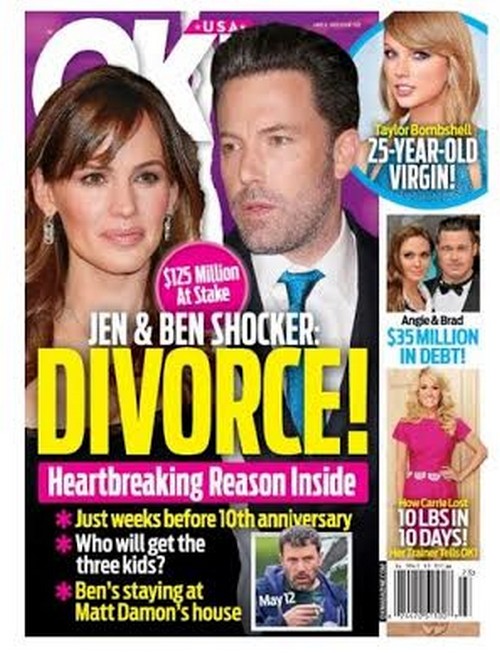 Ben Affleck and longtime wife Jennifer Garner are allegedly getting a divorce – and reportedly calling it quits on their 9 year marriage. Although Ben and Jen seemed to overcome all odds, like rumored cheating, his gambling addiction, and drinking problems, the stress has finally taken a toll on his actress wife and she wants out. According to a new report, Ben Affleck and Jennifer Garner are already separated and plan to release a joint statement confirming their divorce in June.

Ben Affleck and Jennifer Garner were easily one of the most solid couples in Hollywood, and they seemed to weather all scandals that were thrown their way. But, the couple has finally decided to throw in the towel and according to OK! Magazine they are preparing for a messy $125 Million divorce and custody battle. According to one of OK! Magazine’s inside sources, the final straw was in April when Jen accused Ben of cheating (again). The source dished, “Jen accused Ben of getting too close to his costar Anna Kendrick, and Ben was so indignant that he promptly ditched his wife on her birthday for a Buddhist retreat in Canada where he was spotted without his wedding ring.”

It sounds like Jen Garner and Ben Affleck’s divorce is going to be a long and bitter one – and according to OK! Magazine, Ben Affleck could lose whopping $40 Million to his wife and mother of his children when they go their separate ways. And, he may lose his children as well – because Jennifer plans to go after full custody of their two kids. Considering Ben’s alleged affairs and gambling scandals, on top of the fact that he is always off on set somewhere and never home, it really is surprising that Jen and Ben made it almost to their ten year anniversary before giving up and getting a divorce. Do you think there is still hope they could work it out, or is their marriage officially over? Let us know what you think in the comments below!