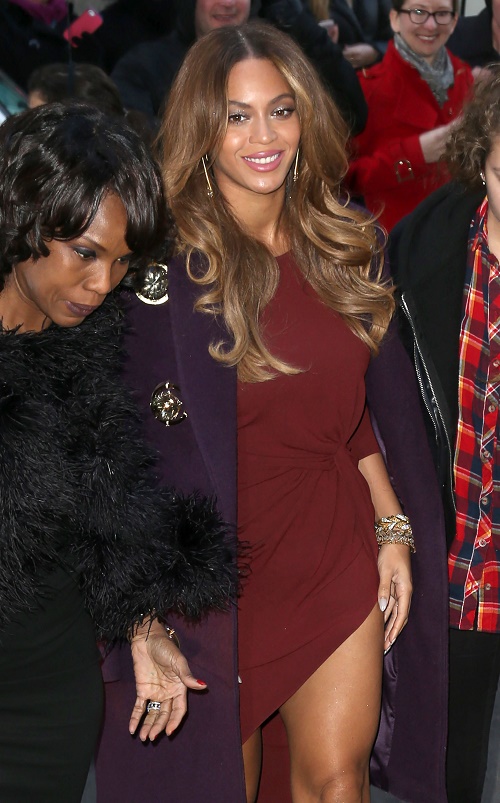 Jay Z and Beyonce spent most of 2014 trying to repair their marriage and fending off an imminent divorce. It looks like the power couple’s break-up has been put on hold though, because Beyonce is pregnant with baby number two. The singer and mother of Blue Ivy was spotted at a basketball game in December trying desperately to cover up her obvious baby bump and pregnancy.

According to the January 12th edition of OK! Magazine, “The couple [Jay Z and Beyonce] caused triple takes at a December 8th game as Beyonce tried in vain to cover up what appears to be a growing baby bump. Earlier Bey was spotted near her New York City office in a baggy hoodie with a flannel shirt tied around her waist, leading fans to wonder if she is expecting a sibling for 2 year old Blue Ivy. The timing works, she and Jay finished their tour in September and have no shows scheduled for next year.” A witness at the December 8th basketball game told OK! Magazine that Beyonce clearly had the pregnancy munchies and was “eating everything in sight” – including popcorn, candy, soft drinks, and peanuts, but no beer.

Rumors have been running rampant for most of 2014 that Jay Z was trying desperately to save his marriage, and Beyonce was ready for a divorce. Multiple sources reported over the last few months that Jay was pressuring Beyonce to get pregnant again – because he thought that a new baby would save their relationship and make them as happy as they were when Blue Ivy was born. Also at the end of the couple’s tour insiders were reporting that Beyonce was trying to conceive and she had refrained from drinking alcohol backstage.

Do you think Beyonce is pregnant with baby number two? Will another baby be enough to save Beyonce and Jay Z’s marriage? Let us know what you think in the comment section below!