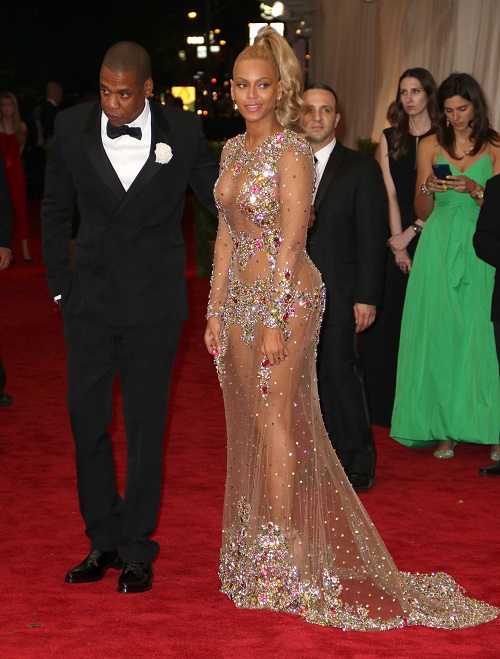 Beyonce and Jay-Z both made an appearance at the 2015 Met Gala, but instead of keeping it professional and reserved, Beyonce decided to make a statement. What exactly she was trying to say, I’m not sure – but she was definitely trying to say something. How do we know this? Well, she turned up to the event in a completely sheer dress, with a few speckles jewels covering her breasts and her navel region.

I mean, it’s Beyonce – she obviously knows what she’s doing. She and Jay-Z were one of the last ones to arrive at the event, and she knew that turning up in that dress would steal all the attention. She was probably trying to distract people from the elevator incident, which had happened one year prior at the same Met Gala. However, wearing such a risque outfit that showed her practically naked was not the way to do it.

Sure, nobody’s really talking about the elevator incident from last year, especially as Solange didn’t pose with them. However, they are talking about Beyonce’s outfit, and why someone with so much power and so many fashion connections would wear an outfit that… well, unclassy.

It’s the Met Gala, we get it. It’s all about taking fashion risks and doing something different and new. Except Beyonce’s outfit wasn’t different or new, it was just a repeat of several outfits that had come before her, especially Britney Spears’ sparkly bodysuit during the Toxin era. So Beyonce wasn’t being innovative or risk-taking, but cliched and cheesy – in addition to screaming for attention.

The Beyonce of olden times would never have to work this hard, and it truly is a testament to how much the elevator incident – and everything that came after – continues to affect their public image, and in turn, Beyonce’s and Jay-Z’s perfect couple facade.