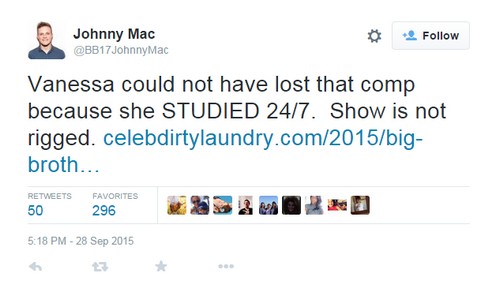 “Big Brother 17” may be over, but that doesn’t mean the “BB17” gossip has to be over. John McGuire – Johnny Mac took to Twitter and called out CDL while he defended his game play moves and tried to make sure none of his fans believed that the show could be rigged in any way. John seemed genuinely insulted that anyone would dare imply the show was fixed for Vanessa Rousso or anyone else for that matter.

Johnny Mac tweeted to his fans today that CDL’s article stating the show appeared rigged in Vanessa’s favor was incorrect. According to him, the reason Vanessa did so well was that she studied 24 hours a day – giving herself no downtime at all. John was flabbergasted at the claim that there was even a slim possibility that the show was rigged in Vanessa’s favor. The question remains – was John being honest in his tweet or was he doing damage control after HE claimed Vanessa could have had an edge in the game?

Vanessa had clear advantages in the game including some which blatantly violated BB17 rules. She was confident throughout the game – because she considered herself an ‘expert’ in game strategy. Vanessa bribed houseguests with money to get them to vote or agree to volunteer to go on the block; “Big Brother” had to inform her it was against the rules.

Even after Vanessa was told not to use bribery in the game, she told Liz Nolan that if she won the game, those who helped her get there would have a very good Christmas. “I am very generous with my family and friends,” Vanessa touted. This is a bribe that is on the record and violates BB17 rules – whatever backtracking Johnny Mac wants to do now, this fact remains and BB17 production’s failure to call Vanessa on this certainly is grounds for fans to suspect rigging and cheating.

And shall we ignore Steve’s statements during Final HOH competition?

Week after week, fans saw Vanessa have the clear advantage in the game. It seemed like everyone knew she was picking the other side of the house off one by one, but no one wanted to challenge her. Becky decided to take a stand during her H0H reign, only to see Shelli evicted instead of Vanessa – which was the sole reason Becky faced evicted the following week.

It doesn’t seem hard to put it all together to see that it is a possibility, even a slim chance that BB17 production manipulated the game in Vanessa’s favor and her success was not entirely due to studying 24/7. The only people who are certain that there was no rigging and cheating are former houseguests of “Big Brother ” all of them with Big Brother contracts and vested interests.

First, it was “Big Brother 15” McCrae Olsen during the season claiming that “There is no way the show is rigged. I am sick of hearing everyone say that.” Now, Johnny Mac is touting the same line. Do you think that the show could be rigged in any way? Do you think Johnny Mac NOW proclaiming the show is not rigged to save face with CBS after implying on live feeds that in fact it was the case? 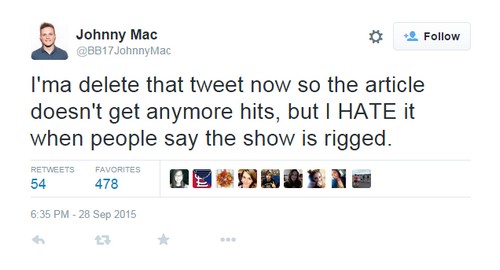 Update: Johnny Mac deleted the original tweet calling out CDL and has since ranted further about how angry it makes him when the media implies the show was rigged.

Johnny Mac came out of the Final 4 Veto meeting and he said to Steve on live feeds, “The game has to be rigged for Vanessa to win. How else can she win almost every challenge?” Now CDL is so sorry if Johnny ‘HATES’ when media calls like it sees it but those are Johnny’s words above, not ours.

Don’t forget to check back with CDL later for “Big Brother” rumors, updates, and gossip.