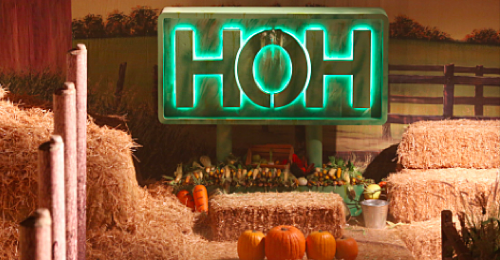 Tonight on CBS Big Brother 17 airs with an all new Sunday September 13, season 17 episode 36 called “Episode 36”, we’ve got your recap down below! On tonight’s episode nominations are revealed.

On the last Big Brother, another houseguest was evicted from the compound. Did you watch the last episode? If you missed it we have a full and detailed recap, right here for you.

On tonight’s BB17 as per the CBS synopsis “the Head of Household competition that was started last episode is completed and nominees for the eviction are revealed.”

#BB17 begins with a look at the #HOH competition. Last we saw the house guests, they were moving eggs over a large chicken wire rainbow arch. It looked like Austin, John and Vanessa were tied. In addition to the HOH reward, there’s a luxury prize for a trip to get out of the BB house for a once in a lifetime experience.

Liz drops egg after egg. Steve watches and hopes that John or Vanessa will win HOH and not nominate him. He knows if Austin or Liz win, they will be after him. John is the first to get an egg. He wants to make a big move and is ready to get blood on his hands. Vanessa also gets an egg. Julia drops another. Austin gets his second. He’s in the lead.

Vanessa gets a second egg to tie it up with Austin then John lands a second. Liz is close to getting one finally. Vanessa, John and Austin get a third then Austin drops one and has to restart. Julia drops two more and then another and Steve is pleased. Liz finally gets a second after Vanessa lands her fourth. John ties it up with Vanessa. Liz gets a third and Vanessa a fifth.

Austin gets a fourth then John a fifth. Vanessa gets her sixth. Liz decides to go for the luxury prize since she knows she can’t win HOH. She says whoever wins HOH will go with her on the prize. Austin gets a sixth, John gets a seventh. Austin catches up. Vanessa lands her eighth. John ties it up. Vanessa is almost done with her ninth when she drops an egg. Austin gets an eighth.

Austin drops another and has to restart. Vanessa gets her ninth and starts her final egg. John is close to his ninth as Vanessa starts her tenth but then she drops an egg. John lands his ninth and Vanessa is just a couple of feet ahead of him. Vanessa tucks her tenth egg into the pot of gold and she wins HOH. Steve hopes that he’s safe and the showmance couple will be targeted.

Vanessa has two alliances and Liz is on to her and says she’s capable of doing anything. John hopes that Vanessa sticks to the deal to take out Austin or Liz. She hopes Vanessa isn’t paranoid about them and sticks with them. Steve goes to hug Liz who’s crying. Liz thinks that Vanessa will go after her and is crying and being pitiful.

Austin tells Vanessa she did a good job. Vanessa wonders who she should keep. She plans to ask everyone what the deals were. Austin says he made a deal to keep Steve safe. Austin is annoyed that she’s paranoid and not seeing he and Liz as her alliance. Vanessa goes to ask Steve what Austin would do if he won HOH.

He says it would have been a choice between, John, him and her. He says Austin didn’t tell him who he would put up but said Austin told him he would keep him safe. He says Liz told him flat out that she was going to put him on the block. Steve admits that he made a deal with Liz to break a tie in his favor if it came down to it. Vanessa says she gets that.

Vanessa says that means Liz made a deal to send her home. Vanessa tells Austin she put faith in people and not everything is lining up. She says she’s upset with Liz. She says Liz gave her a promise that she wouldn’t vote against her but also made that promise to Steve. She asks Austin about John and he says he told Steve and John he would take them to final four but was lying.

Vanessa says it’s hard to believe people when they’re saying what they have to say. Austin says he would never go against her. Vanessa says she thinks something shady is going on. Vanessa talks to John and asks if he talked to Austin or Liz about how they would put up if he won. He says Austin told him that he wouldn’t put him up.

He says he did what Vanessa told him to and reminds him that she told him to make a deal with him that she would break it. John is annoyed she didn’t remember this and she told him to do it to hide their alliance. Liz talks to Austin and she asks what’s up with Vanessa. He says she’s mad about the deal Liz made with Steve and says she needs to tell Vanessa she was lying.

Austin thinks that Vanessa’s paranoia is something he’s been dealing with all summer. He wants to calm her down so she doesn’t target them. Liz says Steve told her that she had to say it or he would vote her out. Liz cries and acts out. Steve hears them talking and runs back to the kitchen telling himself that they are talking. Vanessa presses on Liz who says she had to lie to him.

Austin tries to mitigate. Then Vanessa asks Austin about nominations with John. Austin lies and says he never talked nominations with Austin. We see a flashback to Austin and John talking and Austin says he needs John since he can’t beat Liz if they are the final two. Austin and John have a final two deal. Austin says John never told him anything and they never talked names.

Austin says he is only committed to Liz and Vanessa and says she can’t believe John. Austin is lying, of course, to try and save his ass. Vanessa says she’s going to go with her gut on this one.

She says getting to final three means it’s better to be with people who have won fewer competitions. She says going after Johnny Mac is smart for her. Steve says this is more risky for her. She says it’s risky for her either way. He says that there are numbers with her and him and John. He says John wants a final three with them. Steve is annoyed that she’s making the bad choice.

He says it won’t help her at all to go this route. Vanessa says she’s 60% sure this is what she’s doing. Vanessa talks to Austin to make a deal. She says she knows it’s better to go against them but says they have to vote like she wants. Austin says he will vote the way she wants. Vanessa says she’s targeting Johnny Mac and says if he wins the veto, he can’t use it.

She says next week he needs to win the HOH. Austin knows he needs to get himself in a strategic position to advance and he says they had a final two deal since day two and says he will put himself ahead of Liz if he has to. Austin swears to her that he will do what she asks. Vanessa and Austin shake on it. Vanessa says he’s saying all the right things.

Vanessa thinks that if he sticks with what he says, it’s best for her. The doorbell of the house rings and in comes Frankie Grande for the #LuxuryReward. Liz runs out squealing. Steve is excited and says he’s fan girling. Liz won the luxury prize and Frankie says he’s taking her to his sister Ariana Grande’s sold out concert. He says she gets a VIP experience, will meet his sister, gets a suite to watch from, etc.

He says he has a Hollywood special effects team to disguise her so no one will know she’s there since BB is still airing. Liz wonders who to bring – Vanessa or Austin. Austin points towards Vanessa and she chooses her. Vanessa is happy that Liz kept her word about taking the winning HOH. The girls dress up and leave with Frankie.

He takes them to the hair and makeup team for their transformation. Vanessa has a long purple wig on and looks like a rocker chick. They made Liz to look like a sexy soccer mom. They are just thrilled to be out of the BB house. Frankie meets them at the Staples Center and takes them inside. They meet Ariana who gives them big hugs and they take some pics with her.

Frankie takes them to the suite and gives them a swag bag of goods including Ariana cat ears and then a bottle of her new perfume that hasn’t been released yet. Then the show starts and Liz, Vanessa and Frankie dance around. Liz says it was the best night ever. Back at the house the guys lay around eating and chilling. The girls come back and they show off their disguises.

John hugs Liz and she says her name is Dakota and says Vanessa is Rocky. Vanessa tells them all about their night. John just wants to focus on nominations. John goes to talk to Vanessa to see where her head is at. She tells him she was sure she was going to put Liz and Austin up then says it’s her in the middle of two pairs and says Steve would take John to finals over her.

She asks John who he would take to finals. He says he would get rid of Austin but if he couldn’t, he would take out Steve. She says she doesn’t want to put him and Steve up. John says Vanessa’s gears are going to get stuck. He’s hoping her head explodes and somehow he will be safe. She asks if he’ll be mad if Steve goes and he says he’d be all right with that.

Steve says Vanessa promised him he’s not the target but he can’t trust her and wants the veto. Vanessa hopes that nominations stay the same and she doesn’t have to put Austin or Liz up. Austin is also determined to win the veto. John says he’s going to do whatever he can to win the veto because he knows he’ll be evicted if he doesn’t. Evictions will be Tuesday this week.

Check CDL if you want to know who won POV and what happened at the Veto Competition this week by clicking right here!