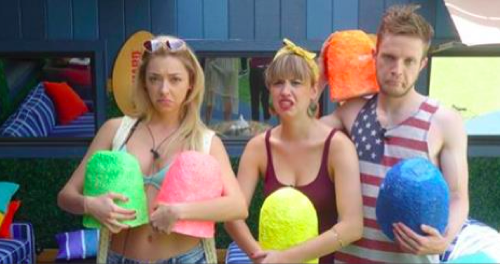 Tonight on CBS Big Brother 17 airs with an all new Thursday September 3, season 17 episode 32 called “Episode 32”, we’ve got your recap down below! On tonight’s episode two houseguests are evicted from the compound.

On tonight’s BB17 as per the CBS synopsis “two houseguests will be evicted from the house.” Tonight either  Julia or Meg will go home and unbeknownst to the houseguests this is “double eviction” week!

#BB17 tonight will have a live double eviction. Right now, Julia and Meg are on the block. This is the chance to break up the #Austwins. The nominations end and Meg is upset that this nomination didn’t help her at all. John is feeling good that he’s not in danger. James is excited that Julia is there and hope the others know they can bring up the trio right now.

Julia says she knows she’s a huge target. Vanessa says Austin and Liz will vote to keep her and so will Steve so she feels confident. Meg tells James this isn’t good but James says ther are people that have been in a worse situation. He says she doesn’t know what Steve and John are thinking. He says it can be a good opportunity. John tells Vanessa that he needs to make and break deals.

Vanessa says she’s in the opposite position. She tells him that she went against Austin and the twins to protect him. John tells her that Steve doesn’t even think they get along and they make a final two deal. The dentist is eating Fun Dip! John, James and Meg talk. James says they need to break up Austin and the twins. James says they control all the votes right now.

James says splitting up the three makes sense. Meg says they could save each other for a couple of weeks. John is excited about that. Austin and the twins nominate him and sent him home. But he knows Vanessa wants Meg out. Meg says it could flip the house and James says it could change the game. John talks to Steve and says they may need to flip it. He tells Steve that they will be nominated next if Meg goes home. Steve is open to it.

Vanessa finds Steve in her room eating Fun Dip. He tells Vanessa he trusts her and has her back. He tells her if they go to final five with scamper they will be the two against the three. She says leaving Meg with James, it’s also risky. He proposes if they leave Meg in, James won’t come after them. She says Meg and James won’t work with them and says he’s lost his mind. Steve worries about his decision and is upset. He says he can hear his mom telling him to split up the twins.

Julie tells the house guests that Meg was evicted. Meg heads out to huge cheers from the audience. Meg tells Julie that Vanessa is a favorite but there was a plan to go after a James and she was a whoops when they went after him. Julie asks about her keeping Vanessa. She says she doesn’t regret keeping Vanessa because she says she and James would be in the same position. She says she doesn’t know how to take Vanessa sometimes and would rather she’s out of the house.

She says Vanessa listens to every single word you say. Then Julie asks about James’ crush on her. Meg says they are best friends and he’s amazing but there are no fireworks. Meg says she’s glad she got to play and says it’s a lot harder than she expected. The idiots who can’t do the math on Austin and the twins deserve to lose this. This was their chance to break up a three vote block. What were they thinking? Now it’s time for the next #HOH. It’s called #BBRoadtrip.

Liz whispers in consultation with her allies. She immediately nominates James and John. Those idiots wouldn’t be in this position to go out so easily if they had broken up Austin and the twins. Hopefully Vanessa will try and save John. Now it’s time for a speedy #POV competition. The veto players are everyone but Vanessa. They have to roll a boll into a numbered slot and the high score wins the #Veto. Steve scores zero.

John also scores zero. Austin scores 15. Liz scores 15. Julia scores 17. James also scores a zero. That means James or John is going home and Julia likely will leave nominations the same. It’s time for the veto meeting. James says if he’s sent home, he appreciates them as friends. He says he tried not to make it personal. He says he’d like them to use the veto on him. John says it would be awesome to veto him and says use it. Julia says she loves them but she’s not going to use the veto.

James wasn’t even packed! He comes out to lots of crowd cheers. Liz hugs John and says – you know who my target was. Vanessa is crying again and says she’s so overwhelmed. Seriously – can she quit bawling. Julie says James didn’t even try to stay and he says he knew he was a huge threat and knew he was their next target. He says he found out Steve was working with them at the last minute and says they were a strong group.

Julie says he made bold moves like nominating Clay and Shelli. She asks why he didn’t play more aggressively later. He says the more aggressive players were getting targeted. He says 7th wasn’t too bad and says it’s a tough game. Julie asks about Meg and asks if he can get out of the friendship zone. He says he’s been trying for 75 days and if he hasn’t gotten there yet, he might as well throw in the towel. Julie says that’s realistic.

Back in the house, they talk about packing James’ stuff for him since he didn’t get to pack. Steve goes off on his own. John tells Julia she finally got a W – a win. They talk about the ball game they played for veto and how hard it was – and that’s it for the night.