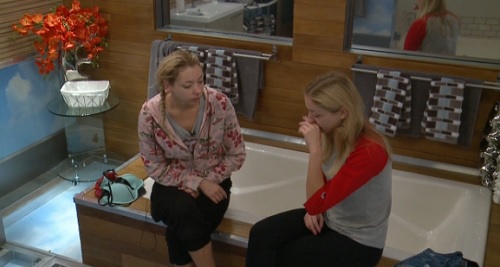 Leave it to Vanessa Rousso, prone to Overthinking Disease, to invent a new lens through which to observe the Big Brother 17 game. According to Big Brother spoilers, late last night, Vanessa saw James and Steve talking with one another – for a bit too long. This of course caused Vanessa’s sixth sense to tingle in all sorts of different ways, thus leading her to believe that they may in fact be working together – and the solid bond they seem to share might extend beyond them two. V and Austin chatted, and they both seemed to agree that that Meg, James, John, and Steve are working together in a tight alliance – and that whomever comes back from the Jury House will be on their side as well.

Vanessa told Austin that it would be a smart move for them to target her, as doing so would set them on the correct path towards shifting the dominating power in the house in a gigantic way. Vanessa said that after she won the PoV, Meg’s visible disappointment illustrated that something else must be at work. Of course, we as viewers and spoiler mongers know that Austin had a hand in forging some “extracurricular” deals with people outside of his alliance with regards to Vanessa this week. So not only is Austin paranoid that his activity will come back to bit him in the butt, but he believes Vanessa’s theory that the opposite side of the house is trying to turn the tables on him and oust his alliance from power. Later, Liz showed up, and Austin informed her that they are “100%” back with Vanessa.

Sunday afternoon BB17 spoilers on the LIVE Feeds showed Julia and Liz chatting in the HoH bathroom about Vanessa’s hypothesis: That the other side of the house is working together in a tight alliance and, in all actuality, is gunning for them. Julia said that she has always trusted Vanessa and that she was her biggest advocate – even when Liz and Austin were ready to toss her to the curb. They admit that they are glad that they finally realized that they could trust Vanessa – and are even more happy over the fact that they didn’t react too hastily in nominating her this week. Because, even though the other side of the house might not be working together, if Vanessa would’ve been put up as a “pawn,” then they probably (more than likely) would have made the big move to evict her, which would’ve paved way for a massive power shift in the Big Brother season 17 house.

The twins said that they need to keep John around for the sole purpose of him being their pawn. He’s not a target, he’s their future dummy, and they cling to that notion as they discuss who to evict this week.

Later, Vanessa popped into the HoH room to chat with the Twins – she wanted to talk with them a bit about where her head is at and, especially, why they can trust her. Vanessa goes off about how she has always had good intentions, no matter what people have said about her, and that she has always had the Twins’ best interest at heart. It’s the truth.

The other point she made – a good one, and one she also made to Austin – was that . . . “Yeah, you might have your doubts about me – or whatever. But you can be sure that I’m not with the other side of the house.” Her argument is a sound one: Why put all your eggs in their basket over my basket when you know their basket could potentially be riddled with evil and woven from dark, deceitful intentions? (Does that analogy make sense? I’m trying to channel ALL OF VANESSA’S DRAMA & FLARE – just envision me crying while typing this and seeking comfort in my green beanie or a trusty bandana.)

Vanessa said that she has HONESTLY never been after them nor were they ever at risk of going home. She flat out revealed that she was targeting Austin after he lied to her – and she’ll make no bones about that. That’s already been laid out to dry on the table, and she owns up to that – and doesn’t really regret looking out for her own game and attempting to make a decision that would benefit her. She says that, regarding her allegiance to the twins, they can validate the facts with Shelli if she ever were to come back into the house.

Vanessa said that Clay and Shelli knew about the twins all along and, therefore, had to mask their knowledge by sending out false threats against them. But in no way were they ever valid threats – and they were always safe in her book. They always had the votes to remain alive and active in the game. She said that she has treated them as if they were her sisters – and she’ll continue to do so. Vanessa said her word is good. They can trust her. Yes, yes, yes, we know you’re such an honest person, Vanessa.

Vanessa said that she knew in her gut that when the Twins looked at her that they trusted her – but that they also had these reservations. They are so glad that they had this conversation and that the bridge between them has been mended officially. Austin’s Angels are back in business.

But for how much longer?

Leave your thoughts in the comments below and don’t forget to check CDL daily for all your Big Brother spoilers, gossip, news, and updates.