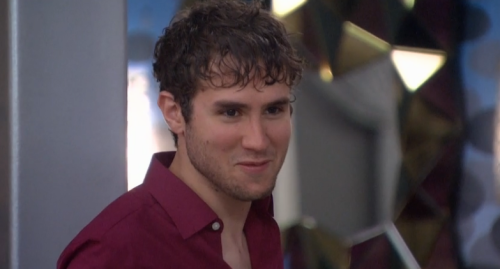 “Big Brother 17” spoilers are in and round 2 of the final Head of Household competition is over – and the underdog Steve won. Steve and Vanessa (winner HOH round 1) will face off – the winner will advance to the final two and cast the sole vote to evict on Wednesday. With Liz unable to compete in the final round, her only hope is that either Vanessa or Steve will vote to keep her. Who will win the final round- and who will they take to the final two?

Steve won the round two of the final HOH competition, and will advance to round 3 – and face off against Vanessa. At around 2:18 A.M BBT, Steve told Liz that he couldn’t help but feel upset after hearing production try to manipulate the game results. Steve claimed he heard someone hinting answers to Liz in the competition; however, it didn’t help her in the end – Liz lost the competition. Steve was upset at the fact it was clear that production wanted Liz and Vanessa in the final face off. Steve was warned not to speak about production. The feeds immediately went to fish.

Vanessa approached Steve with (fake) happiness that he won the second part of the competition. She told him, “It’s really happening. It’s me and you in the end, See?” Vanessa told Steve not to reveal to Liz that she would be evicted next, at least not yet. She told him it was best to let her know on Monday or Tuesday because it would be less time for her to campaign to stay.

Vanessa even told Steve that he doesn’t need to win the final round because she will take him no matter what. Vanessa assures him, “Liz has to know she is leaving next. She should have won the second part of the competition.” Steve didn’t look convinced he was safe. He told her he would be absolutely bonkers if he threw it considering what was at stake.

At 2:05 A.M. BBT, Steve told the camera that he would not make the same mistake last season’s Cody made. Steve said, “Five or six weeks ago Johnny Mac told me a very simple line that at first seemed absurd to me but the more I thought about it the more it seemed true to me. Vanessa is Derrick.”

Steve then revealed that he would not be this season’s Cody. He plans to take Liz to the final two and vote Vanessa out. It is all riding on one thing – Steve must win the final round of the Head of Household comp and take Liz with him to final 2. With only three days and one competition remaining left in the season, can Steve win or is Vanessa guaranteed to win the season? Don’t forget to come back for more juicy “Big Brother 17” spoilers and updates!