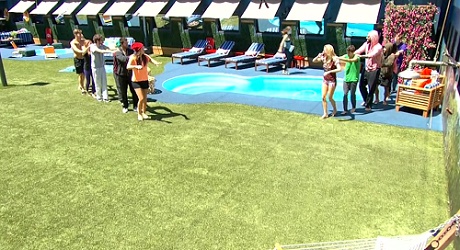 Big Brother 17 spoilers are constantly rolling in via the BB17 live feeds and, therefore, we think it important to bring you some of the day’s top highlights. We watch the feeds so you don’t have to!

Last night, Big Brother spoilers revealed that Vanessa and Austin had come up with a master plan to paint Jeff as a liar-liar by making him “public enemy #1” and framing him to look like “Audrey 2.0.” V’s reasoning for this move – to stage an argument between Austin and Jeff for the entire house to witness – is supposedly in effect to provide her with the “justification” and ammo she needs to make Jeff the REnom after Johnny Mac removes himself from the Block.

Vanessa constantly preaches about her deep sense of loyalty and fairness and kindness, so it’s no wonder she wants to be viewed by other houseguests – even if her opposing side is relatively few when compared to her strong numbers – as someone with not very much blood on her hands once this Big Brother 17 Week 3 concludes.

Thanks to BB17 spoilers revealed earlier in the Feeds, we know that Austin and Vanessa went through with their plan to confront Jeff. There were some onlookers and, eventually, Vanessa got in Jeff’s face – serving up some good ol’ classic aggression. This whole plan was a bit over-the-top, but now it seems that Vanessa is happy and satisfied and now has the justification she (thinks she) needs to nominate Jeff. I feel as if she could’ve put him up with little-to-now repercussions, but I suppose she did have her valid reasons for adding some drama to the house floor.

Don’t forget to check out CDL’s recap of tonight’s episode. Also, keep checking back here for all your Big Brother spoilers, news, gossip, and updates!

Big Brother 17 LIVE Feeds 7/12/15 (this will be updated throughout the day, so keep checking back!):

11:15ish PST — Cameras are on Austin and Vanessa sleeping. Several minutes later, the House wakes everyone up with the “Still sleeping? That’s a party foul” alarm. Everyone’s awake now and they head out into the yard to do a Conga line.

11:27 PST — Big Brother has them continue their Conga line.

11:45 PST — James and Jackie talk about the whole Jeff thing. They realize he’s definitely going up beside James.

11:45 PST — Austin, V, and Julia are chatting about the current state of things.

11:55ish PST — They continue to talk about Jeff and how his lies – especially when he was confronted – have basically sealed his fate. When he was confronted by Austin and V, he tried to turn it around on Vanessa, and she was not having that. She says that Jeff served his head on a silver platter and James, after his heartfelt and rather sincere apology for his game decisions, has redeemed himself.

12:10 PST — Steve comes into the HoH room. Vanessa tells him what happened with Jeff since he, as well as others, were sleeping when it happened.

12:50ish PST — Vanessa and Co. realize that they should probably disperse and stop spending so much time together away from everyone else. Vanessa is really giddy that she’ll escape this week without much blood on her hands. Everyone sees that Jeff deserves to go and James won’t be especially mad with V because she forgave him (probably) and saved him from eviction (probably).

1:00 PM PST — V and Julia make a plan to get closer to the other girls in the house. Julia leaves the HoH room to begin the plan lol.

7:20 PM PST — Clay and Shelli are chilling in the hammock. Clay says this game is too delicate to trust people who you know shouldn’t be trusted. Pretty certain they’re talking about multiple people, but Audrey in particular.