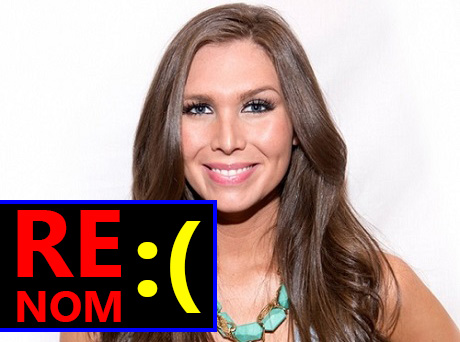 Big Brother 17 spoilers from the CBS live feeds indicate that the Power of Veto Ceremony for Week 4 has been held – and the PoV winner Vanessa Rousso has announced that she plans to use the Power of Veto to save Jason. Obviously, Vanessa isn’t Jason’s biggest fan, but she and the reigning Head of Household Shelli, along with basically the rest of the BB17 house, have decided that is time to backdoor Audrey Middleton and evict her from the game.

When Week 4 began in the Big Brother house, Audrey Middleton was one of the last people that had to worry about going home – but after the epic showdown on Sunday, July 19, the BB17 players have unanimously decided to backdoor her during the Power of Veto ceremony and evict her later this week. If you weren’t following the Big Brother 17 spoilers over the weekend, you missed a ton of drama, and Audrey basically sealing her fate in the game.

Big Brother 17 spoilers from the live feeds reveal that Clay and Audrey got intto a huge fight, and Clay basically called her out for what we have been seeing all along – her wishy washy alliances and questionable loyalties, not to mention her vivid imagination and lying. Clay and Audrey’s fight escalated, and came to a conclusion with some screaming and Clay locking Audrey out of the diary room. Vanessa jumped on the anti-Audrey bandwagon – apparently their final two deal is out the window – and in no time Vanessa, Clay, and Shelli had convinced the entire house that it is time for Audrey Middleton to go. Of course, her diva antics and screaming match with Shelli’s showmance partner Clay didn’t exactly help the situation any.

Now, according to Big Brother spoilers via the LIVE Feeds, we can confirm that Vanessa has in fact chosen to use the PoV on Johnny. Audrey is the REnom.