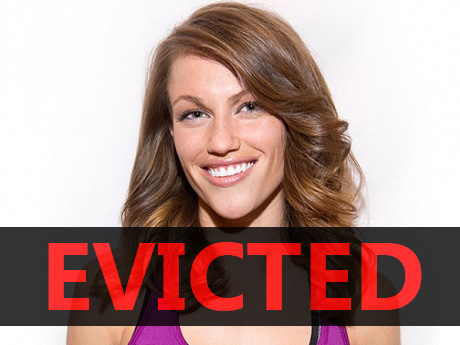 The Week 8 LIVE Eviction Ceremony just aired on Big Brother 17 and the votes are in: Becky Burgess has officially been evicted from Big Brother season 17. After the Week 8 Power of Veto Ceremony, Becky and John found themselves officially on the chopping block – and one of the players’ time was bound to run out. It was just a matter of who. Although Becky might still return to the game, BB17 spoilers have teased that someone from the jury house will get the opportunity to compete to get back in to the house.

BB17 spoilers teased at the beginning of Week 8 that Becky Burgess was safe, although the house’s strategy seemed to change as the week went on. The twins, Liz and Julia Nolan, decided during a late night strategy talk that it would be more beneficial for them to keep Johnny Mac in the house and send Becky Burgess packing. The twins realize that their partner Austin is going to have to be evicted at some point – and they think Johnny Mac will be the perfect person to do their dirty work in the future.

So what led to Becky’s demise in the house? Overall, her popularity rating seemed to drop rapidly as she got caught up in more and more alliances and house drama. And no one is really sure where her loyalties truly lie, which make her much more dangerous than anyone in an actual alliance.

Have you been watching Big Brother 17 this season? Are you sad to see Becky Burgess go? Let us know what you think led to her eviction in the comments below and don’t forget to check CDL for all of your Big Brother spoilers and recaps!