Big Brother 17 Spoilers: Who Was Evicted, Julia Nolan – Liz And Austin Make A Deal With Vanessa 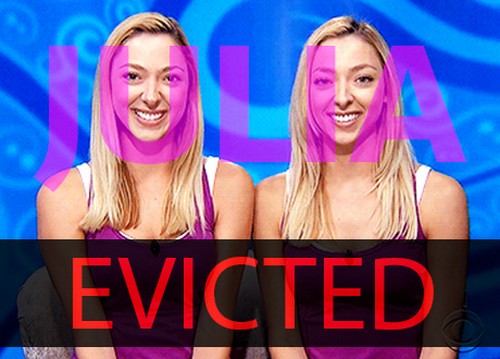 Big Brother 17 spoilers from the live Thursday September 10 eviction episode tell us that the BB17 players officially voted to evict Julia Nolan, saving her sister Liz and giving her another week in the house. Week 11 has definitely been an interesting one on the CBS live feeds. Steve won the Head of Household this week and promptly put Austin and Liz up on the block, however Austin won the Power of Veto and saved himself, so Steve put Liz’s twin sister Julia up on the block to replace Austin.

Big Brother 17 spoilers from the CBS live feeds reveal that the houseguests did something bizarre – they told the Nolan twins that they could decide who should be evicted. After some back and forth strategizing, Julia agreed to take one for the team and head to the jury house. Obviously, Vanessa was not on board with the plan because she wanted to separate Austin and Liz, and keep Julia. After some negotiating, Vanessa agreed to save Liz – as long as Liz and Austin promised she was safe and wouldn’t be nominated during Week 12. Side note: Austin and Liz have already discussed it and have no intention of keeping that promise to Vanessa.

So, what lead to Julia Nolan’s eviction in the Big Brother house? Honestly, she played a pretty solid game considering she had a huge target on her back because her twin sister Liz was also in the game. It really is a miracle that no one decided to separate the Nolan Twins sooner. However, Julia wasn’t great at competitions. If she had pulled it together and at least won this week’s HOH or POV competition, she wouldn’t be in the position that she is in now.

What do you think BB17 fans? Did they make a huge mistake keeping Liz and voting out Julia? Let us know what you think in the comments below and don’t forget to check CDL tomorrow for more Big Brother 17 recaps and spoilers.