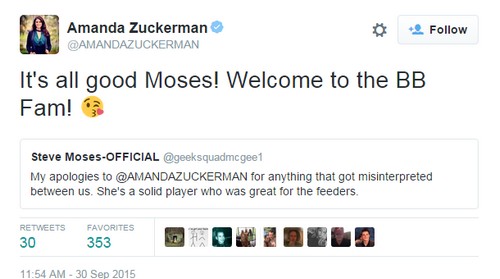 Big Brother 17 winner Steve Moses has been bullied by GinaMarie Zimmerman into apologizing on Twitter to Amanda Zuckerman for his sexist attack. BB17 drama has been out of this world this week. Season 17 winner, Steve Moses attacked “Big Brother 15” Amanda Zuckerman in an interview earlier in the week. He called her out for being a bully and implied that it wasn’t okay for her play such an aggressive game as a woman. Many fans – and even haters – of Amanda’s were offended by his remarks, but none was as outspoken as GinaMarie Zimmerman.

GinaMarie played “Big Brother 15” with Amanda. She knows her both inside and outside the house. GinaMarie did not appreciate Steve trashing her best friend and made sure all “big Brother” fans knew that she felt Steve owed Amanda a sincere apology. Many felt that Steve may not apologize; after all, in the house he wasn’t the bravest houseguest. Can you imagine how he must have felt reading the hatred GinaMarie expressed towards him on Twitter late last night?

On September 30, Steve Moses decided to apologize on twitter to Amanda after being bullied by GinaMarie and her fans. GinaMarie made sure he knew that he was a coward by making rude and snide comments behind Amanda’s back. Amanda seemed cool with everything and assured Steve there were no hard feelings on her side. She welcomed him to the “Big Brother” family.

In Steve’s apology to Amanda, he told her he was sorry for anything that was misinterpreted as an insult. He went on to say that she was a strong player who created drama for the live feeds. Fans were left scratching their heads with his apology. Not sure how his comments could have been misconstrued. He said she was a bully who seemed like she enjoyed being mean to others. It seems like every way you slant that comment, it wouldn’t be a compliment.

The fans were relieved that GinaMarie settled her beef with Steve Moses after he apologized to her girl, Amanda. GinaMarie Zimmerman implied that just because he apologized didn’t mean she liked him. Steve has been pretty vocal on twitter today and assumed the title of Amanda’s bodyguard. If anyone says she is a racist or bully, he’s there to let you know she is a wonderful person. Do you believe that Steve’s apology to Amanda Zuckerman was sincere? Don’t forget to check back later for more “Big Brother” rumors, gossip, and updates!