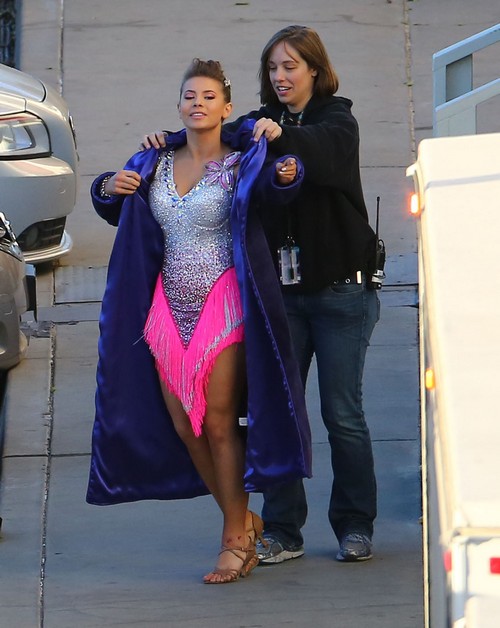 Is Season 21 of Dancing With The Stars rigged? Bindi Irwin’s success on the ABC dancing competition has raised some eyebrows of DWTS’ fans over the course of the last few weeks. Bindi Irwin and Derek Hough are a force to be reckoned with on Dancing With The Stars – and no one seems to think that the other remaining couples have a chance of winning the Mirror Ball Trophy.

Is it because Bindi and Derek are just that good, or are TPTB giving them a leg up on the competition?

According to a new report from GLOBE Magazine, this is not the first time that whistleblowers have revealed that Dancing With The Stars is fixed – if you recall, Hope Solo wrote a memoir in 2012 that revealed the reality competition was rigged.

GLOBE reports, “In 2012, soccer star Hope Solo, a two-time Olympic Gold Medalist said ‘DWTS is rigged’ in her book, ‘Solo: A Memoir Of Hope.’ Furious producers charged then that she made up the allegations merely to sell the book. But, Hope’s claim is that her DWTS partner Maksim Chmerkovskiy told her of the fix.”

Every season it is obvious what celebs the Dancing With The Stars producers want to see go all the way. The “chosen ones” always receive impeccable scores from the judges, way more promos than the other competitors, and never bad editing (like Tamar Braxton received this year). It’s pretty clear to anyone that has been tuning in to Season 21 of Dancing With The Stars that Bindi Irwin is this cycle’s “chosen one.”

A source dished to GLOBE Magazine, “The fix has been in for Bindi on the 21st season because it was obvious early on that the longer she stayed on the show, the fans would keep tuning in.” What do you think DWTS fans? Are the producers and judges giving Bindi Irwin and Derek Hough an unfair advantage over the other dancers? Come back to CDL for all your DWTS spoilers, dances and news!