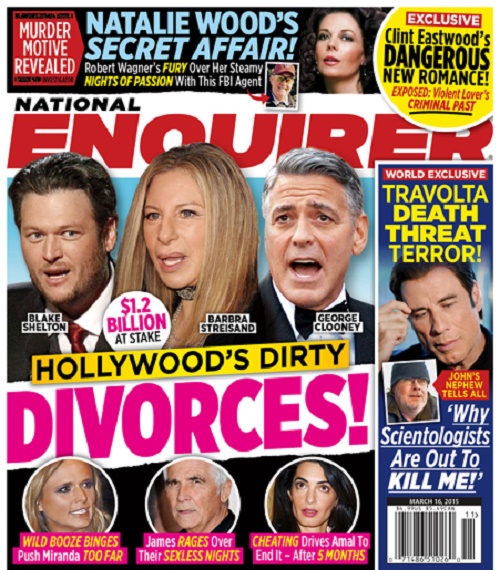 Miranda Lambert and Blake Shelton are nearing  divorce over The Voice star’s constant partying and excessive drinking. The latest cover issue of The National Enquirer insinuates that Hollywood is about to go through a big rash of divorces – so in other words, just like any other week. However, the Enquirer’s cover specifically focuses on a couple that is always at the center of tabloid controversy: Miranda Lambert and Blake Shelton. We already know that both of them are worth millions and millions of dollars, so a divorce would not only be ugly and drawn-out, but financially ludicrous.

The Enquirer’s source claims that Blake’s ‘wild booze binges’ have been pushing Miranda too far, especially since she’s already put up with so much from him so far. Plus, Blake Shelton is back in LA for The Voice, which means constant partying and alleged cheating with supermodels and actresses – not to mention the best wingman in Adam Levine. Even though Adam is married now, that doesn’t mean that he’s going to suddenly change his nature and stop being flirty with every woman that walks by. And we’ve heard enough stories about how The Voice crew parties around LA to know that Miranda Lambert has every right to be worried, cheating or no cheating.

The other couples on the Enquirer’s divorce list include Barbra Streisand and James Brolin, which is apparently due to James ‘raging over their sexless nights’. And then, we have the perennial tabloid favorite: George Clooney and Amal Alamuddin. The Enquirer’s sources continue to insinuate that George Clooney is cheating on Amal Alamuddin, but unlike many other actresses and models, I don’t think Amal would put up with a cheater – hence, the divorce rumors.

Finally, John Travolta’s nephew is speaking out about how Scientology tried to kill him, which is a big claim to make. But knowing what we do about the religion, is it surprising to hear people making these kinds of accusations?