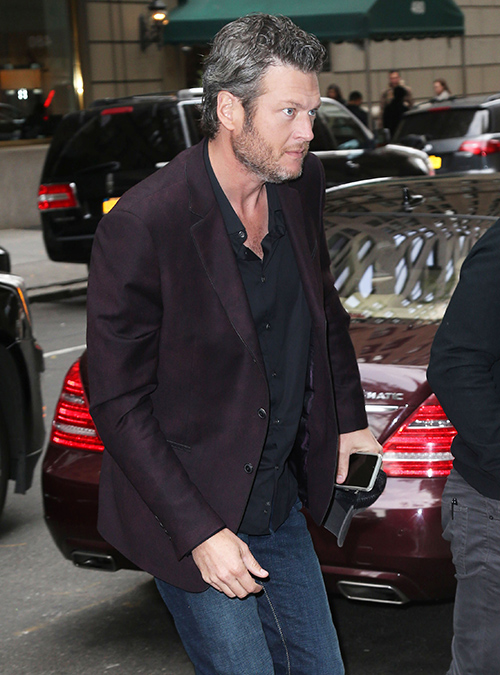 Was Blake Shelton furious that Gwen Stefani spent Thanksgiving with Gavin Rossdale and the former couple’s children? Did a lonely Blake take out his frustration on Twitter fans?

Thanksgiving Day was a family affair at Gwen’s parent’s home. Stefani shared the day with her boys Kingston, Zuma and Apollo. According to Page Six, ex-husband Gavin Rossdale was on hand to celebrate the holiday also. Nope – Gwen did not bring Blake home to meet the parents for Thanksgiving. Did Gwen and Gavin spent Turkey Day with their boys and Stefani’s parents? It sure appears that way.

Blake must not have been too thrilled about Gavin Rossdale tagging along to the Stefani family dinner. Was the country music megastar flying solo? On Thanksgiving morning, Shelton tweeted, “Happy thanksgiving everybody!!!! And to any haters out there, have yourselves a nice warm slice of I don’t give a s***…” OUCH!!! Was “The Voice” coach feeling abandoned by Stefani? Did Blake feel that Thanksgiving was a perfect day for him to meet Gwen’s kids and parents?

Haters weren’t the only thing on Blake’s mind on Turkey Day. Apparently, fellow “The Voice” coach Adam Levine was too. Less than an hour after the “haters” tweet, Shelton shouted out to Levine, “Today I give thanks that @adamlevine is back to looking like Eddie Munster…” Was Blake mad because Adam didn’t extend an invitation to Thanksgiving dinner? Did Blake spend the day alone?

Going back to Gwen – later in on Thanksgiving day the singer tweeted a snapshot and she is kissing one of her sons. The caption that accompanied the photo was, “#happythanksgiving #soblessed #grateful # gx.” No mention of new boyfriend Shelton at all. Is it already over between Gwen Stefani and Blake Shelton? It’s possible the couple kept in touch all day by phone and text. Wonder how uncomfortable things were at that Thanksgiving dinner table?

What do you make of Blake Shelton’s tweet about “haters”? What was up with the tweet to Adam Levine? The reality television star has been known to say things just for attention. Gwen Stefani and Gavin Rossdale may have spent the holiday together for their children’s sake. “The Voice” fans will need to keep a sharp eye on Gwen and Blake’s body language when they return to “The Voice.”