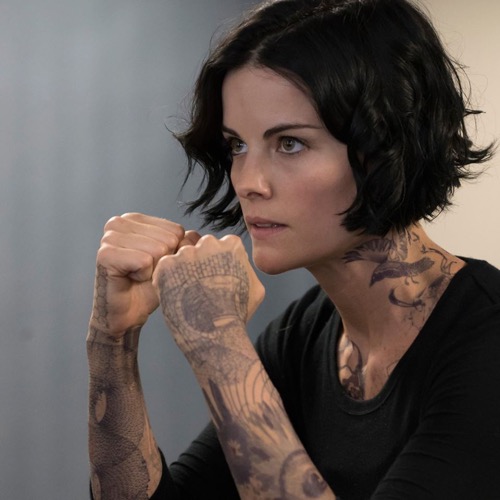 Syfy’s series Blindspot airs with an all new Monday September 28 season 1 episode 2 called, “A Stray Howl.” We’ve got your recap down below! On tonight’s episode, an Air Force pilot with a destructive plan is on the team’s radar thanks to one of Jane’s (Jaimie Alexander) tattoos.

For those of you who don’t know, an unidentified woman with amnesia is found covered with tattoos, and the FBI soon realize that each mark on her body reveals a crime to be solved

On the last episode, an unidentified woman with amnesia was found in Times Square covered with tattoos, including one tattoo bearing an FBI agent’s name, and the FBI realize that these marks are clues to solving crimes in the series premiere of this drama. Did you watch the last episode? If you missed it, we have a full and detailed recap right here for you.

On tonight’s episode per the Syfy synopsis “an Air Force pilot with a destructive plan is on the team’s radar thanks to one of Jane’s tattoos. Meanwhile, Jane recalls bits and pieces of an unsettling memory; and Weller believes he might know who Jane really is.”

Blindspot airs at 9 PM on SYFY and we will be live blogging it with all the up-to-the-minute details. So make sure to come back to this spot and spend the evening with us! Make sure to refresh often to get the most current details and updates.

Jane Doe’s past is still a mystery on tonight’s episode of “Blindspot”. Yet, because of what happened last week during a shoot-out with Cho, the agents handling her case now believe they have a clue into who she was before she became their Ms. Doe.

See, they thought she was possibly a Navy SEAL. That would be explain her skill with firearms as well as that muscle memory she had experienced recently. However, Jane very much doubted her past experience was anything close to ethical. So she doesn’t think the feds were about her past career and she then spent a lot of time worrying about who she was. And whether or not she was even a good person in her “past” life.

But as far as Kurt Weller was concerned, Jane was helping the bureau with her tattoos and so that is what really mattered in the end.

Jane had saved lives once before and Weller along with the others were hoping her remaining tattoos would also serve them in the same fashion. So they put Patterson onto it and she eventually set up something akin to a google alert whenever one of the tattoos started to make sense. And luckily she got a hit within the first 24 hours. A tattoo led to an apartment number and a name.

Major Arthur Gibson was once of the Armed Forces finest. Yet a noted case of PTSD ended up destroying his career out in the field. And so he was reassigned and put on desk duty. Probably for his own safety and for the safety of others. Only, from there, he could have literally been invisible.

He stayed under the radar and just never troubled anyone. So the Major had seemingly gotten written off but when they went to question him – Gibson acted suspicious. It was like he was frightened they were sent there to kill him for talking. And that simply didn’t make any sense at the time because what was there for him to talk about. But, despite their confusion, the agents unintentionally sent off a chain of events by going over to Gibson’s.

And several people died before they could get a sense of it all.

First Gibson blew up his own home to cover his tracks and, while Weller was trying to figure out why, Gibson had enough time to track down a former associate and use that man’s daughter to gain information. Apparently he wanted to kill several high ranking members in the Air Force with a drone and he found a way to do so before anyone could stop him.

Thus the agents had to go back to the drawing board and figure out who they were trying to tack in. Because Gibson was clearly not the same docile man that they heard about from his files.

And, sadly, it seems he was never that man. Though, it took a lot of prodding, Weller ultimately got a four-star General to confess everything he knew about the real Gibson. Starting from the part where Gibson never bottomed out like his original file had claimed.

See, he wasn’t removed from active duty because of any troublesome disease. He was actually promoted – secretly – within the ranks. The real story of the awarded pilot is that he was sent over to the drone program in Nevada and after that was reassigned to New York. However there was no known drone program in New York. So Gibson was aware of a secret program that he could later access at will.

But there was some truths in his file. Gibson did have a problem with the job and with the fact that he was killing people. So he tried to talk his bosses out of the drone business. And as a return for his services they then threatened everything he held dear until they broke him.

And that’s how he became a suspicious mess that the agents were first introduced to.

So Gibson wasn’t killing people at will. He was merely lashing out at those that had destroyed his life and by confronting him – Weller and Jane set everything else in motion.

Yet it’s important to note that Gibson already had a plan in place when the bureau showed up at his door. And like Weller later had to say, Gibson would have gone a spree anyways. All they did was up his timeline.

And by doing that, Gibson went on to make mistakes that he never counted on making and that’s how they caught him.

Their criminal had backed himself into a corner. And he couldn’t take on the Weller/ Jane team. Which happens to be a great team.

So they caught Gibson and Weller was all for continuing with the tattoos.

But was that because he came to trust Jane Doe (based off her own merits) or was it because he thinks she’s Taylor Shaw. As in the girl his father was accused of murdering 25 years ago.