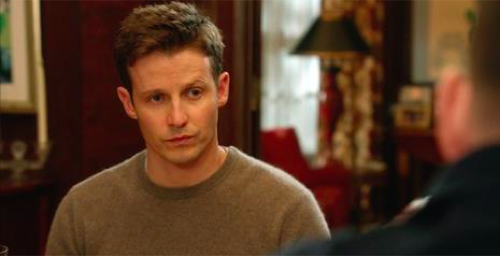 Tonight on CBS Blue Bloods continues with an all new Friday November 20, season 6 episode 9 called, “Hold Outs.” and we have your weekly recap below. On tonight’s episode, a homicide case is reassigned to Erin (Bridget Moynahan) after it results in a hung jury, and she and an ADA investigator try to track down a missing witness.

On the last episode, a serial killer threatened Danny and his family, and the ordeal heightened Linda’s concern about Danny’s job and the state of their marriage. Meanwhile, Jamie challenged his superior officer during a hostage situation. Did you watch the last episode? If you missed it we have you covered with a full and detailed recap right here for you.

On tonight’s episode as per the CBS synopsis, “a homicide case is reassigned to Erin after it results in a hung jury, and she and an ADA investigator try to track down a missing witness. Elsewhere, Jamie and Eddie pose as senior citizens in order rid a neighborhood of a troublemaking gang.”

Blue Bloods “Hold Outs” airs tonight at 10:00 pm ET and we will be live blogging all the details. So don’t forget to come back and refresh your screen often for live updates. While you wait for the recap, check out a sneak peek of tonight’s episode below!

Erin was asked by her boss to do something against her principles. Apparently the District Attorney wanted Erin to take over another ADA’s case after it had gone to mistrial which was another way of saying everything was shut down.

However Erin was more than just upset by the request. For not only was cutting into her vacation time, but she had already been on tense terms with ADA Kelly Blake. A woman she could only tolerate if they did their best to maintain distance from each other.

So Erin was a tricky situation and it didn’t help that Blake was also upset. Blake felt she had done nothing wrong and that with a new jury – she could finally close the case once and for all. And as it turns out she was right to suspect her former jury. There was simply one juror on the Victor Kendrick’s murder case that had voted against the others and that’s what caused the mistrial.

Though, Erin chose to speak with that juror rather than just dismiss him as Blake had done. And that’s when she found out that he had cause to vote not guilty. He said he had read the paperwork and that he thought it was suspicious that only one eye-witness testified.

In fact the man implied that he wasn’t sure the other juror simply voted guilty because the defendant was black. So Erin called in a friend to look over the case and he revealed that the second eye-witness had claimed the shooter in a carjacking gone wrong was actually white. And therefore there was conflicting stories surrounding the man that did shoot Victor Kendrick.

Blake had found Angel who had been questioned in more than one carjacking and she had had one eye-witness to place at the scene. So Erin could tell that the other woman thought her job was done. Yet it didn’t matter to Erin that the second eye-witness had been prostitute with a drug history. What mattered was getting justice.

A prospect that appeared to be drifting away when later that prostitute she was looking for turned up dead.

And furthermore, Erin’s job was going to be a lot harder if her father stepped down as Commissioner. Frank’s positon is usually dependent on the mayor only the mayor didn’t ask for four more years out of Frank when he himself elected. Instead the mayor sat on the decision and ultimately made a request after public opinion began to turn against him.

The Press had found out the Mayor hadn’t asked Frank to re-up and they came down on the Mayor. So Frank did get his call in the end. Albeit it was a few weeks late.

However Frank wasn’t sure if he wanted to stay on as Police Commissioner. A tidbit he let the press in on and that had everyone running scared. None of Frank’s children actually wanted him to retire. They felt their dad would be the most worst off for it and they would have said something if Danny hadn’t been the voice of reason.

Danny told them they should follow their dad’s lead and be respectful of whatever decision he makes. But Frank’s own staff were scared about what Frank was going to do. One of them had just bought a house and another didn’t want to have to go to Staten Island.

As for Frank, he looked like he was confused himself. So what he did was take a step back and seriously thought it over. And then he agreed to see the Mayor. Where they could hopefully discuss their plans going forward.

And in the meantime Erin closed her case when she caught the real perpetrators. Namely Victor’s wife who had ID Angel and the wife’s lover. So it turns out the eye-witness that described a white shooter had been right and she had been killed because she was the only one that stood against the theory it had been a black man to shoot Victor Kendrick.

But Erin wasn’t the only one to gain a win. Jamie had gotten closer to a detectives’ badge on tonight’s episode of “Blue Bloods” when he was the only one to figure out why a gang continued to target only one block.

The man that owned the buildings in the area had wanted to drive out the elderly so they would give up their rent controlled apartments.