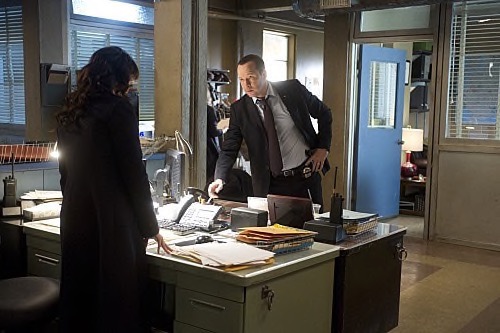 Tonight on CBS Blue Bloods continues with an all new Friday April 24, season 5 episode 21 called, “New Rules” and we have your weekly recap below. On tonight’s episode, in Part 1 of the two-part fifth-season finale, the NYPD deputy chief and his wife are killed in a probable gang hit, so Frank [Tom Selleck] makes this case a top priority and Danny [Donnie Wahlberg] and Baez [Marisa Ramirez] visit an infamous gang member.

On the last episode, when a suspect voluntarily admitted to killing a reality show celebrity chef in his own restaurant, Danny and Baez were convinced the suspect is taking the fall for someone. Also, Frank faced a moral dilemma when a longtime friend, Sen. Ted McCreary, asked for Frank’s help to make a DUI go away, and investigative journalist Anne Farrell returned. Did you watch the last episode? If you missed it, we have a full and detailed recap right here for you.

On tonight’s episode as per the CBS synopsis, “when NYPD Deputy Chief Donald Kent, a commanding officer of the gang division, and his wife are gunned down in an apparent gang hit, Frank orders all hands on deck to catch his friend’s killer. Working the case, Danny and Baez go see Mario Hunt, a well-known member of a deadly gang, in the first of a two-part season finale. Dennis Haysbert guest stars as NYPD Deputy Chief Donald Kent and Cliff “Method Man” Smith guest stars as Mario Hunt, a well-known member of a gang.”

Blue Bloods “Payback” airs tonight at 10:00 pm ET and we will be live blogging all the details. So don’t forget to come back and refresh your screen often for live updates. While you wait for the recap, check out a sneak peek of tonight’s episode below!

All hands are on deck with tonight’s brand new episode of “Blue Bloods” and as anyone can tell you when a cop is taken down then it’s the city that practically shuts down. So, on this one, Danny made sure to ask his father if they could take the lead. And while Frank, generally tries not to show favoritism, he assigned Danny to the case anyways because he knew his son would do everything possible to get justice.

The brutal murders of Deputy Chief Donald Kent, both a friend and a commanding officer of the gang division, and his wife needs swift action. At least from the police.

The NYPD, as a principle, has to show that they won’t back down on enforcing new gang and drug laws in the face of retaliation. However, with the city watching their every move, Danny can’t afford to go off on the rails. Meaning everything must be done by done by the book. And to ensure that happens, the DA’s office has created a special task force to oversee the police and their investigation.

Apparently, in this current climate of accountability, someone like Erin has to be assigned to essentially babysit her brother the NYPD detective.

Sadly, whoever thought Erin would be the best person for the job were in fact wrong. Because rather than be a calming influence, Erin can actually bring out the worst in Danny. Typically, he doesn’t like taking orders but when his sister is literally looking over his shoulder and checking his work then that only makes him want to rebel even more.

He found a witness to the murder and seeing as the witness lives in prime gang activity – the man doesn’t want to cause any trouble for himself.

But Danny feels like he could push this man into admitting something. And he could have done it, too. Yet, his hands were tied and Erin didn’t want to give him any leeway.

She stopped him from technically harassing a witness and then she made him let go one of prime suspects all because he didn’t have proof.

However Mario Hunt was guilty and everyone knew it. So cops around the city were then upset with Danny for “letting” him go. And the victims’ son, another officer even ended up confronting Danny about betraying the men in blue.

So Danny felt like he had no other choice but to drop the case. And had later spoken with his father in hopes to do. Frank, though, refused to allow him to do that. He said he trusted Danny to do the job and to do it correctly.

Neither Erin or the DA’s office were the problem. And Frank didn’t want his son to blame them if the case couldn’t be closed. So instead he gave Danny a challenge. Kent was one of the men behind overhaul on police procedure so in order to get him justice then Danny had to do it the way Kent would have wanted.

Thus Danny did something he wouldn’t have done otherwise. He went to the witness, the one that afraid for his own life, and he talked to the man. No bullying, no heavy-hand. Just talked.

And somehow that convinced Hector into doing the right thing.

Hector was willing to testify and all Danny had to do was find Mario Hunt again. But the second time around was a lot harder. And so Danny and Baez went to go visit old face in prison and see if he would tell them were Hunt was hiding.

Yet, they didn’t get the answers they wanted.

Because, apparently, people in jail still think “loyalty” can matter in their position. But while they strive not to be rats, they are still capable of making threats. Hence Danny knew their eye-witness was in danger and unfortunately he was just too far away at the time to be of any help.

His wife, though, worked at the hospital and when she noticed the danger – she felt she had to protect her patient. And in this case that meant she also had to stand up against a friend. Curtis, you see, doesn’t make a lot of money at the hospital so lately he’s been looking at gangs and flirting with the idea.

Linda attempted to talk to Curtis. And Jamie tried as well. But, ultimately, Curtis didn’t want to make an honest living cleaning up hospitals. And so he chose to join a gang and as part of his initiation – he was told to kill Hector.

However, next week, will it be revealed that he killed both Hector and Linda?