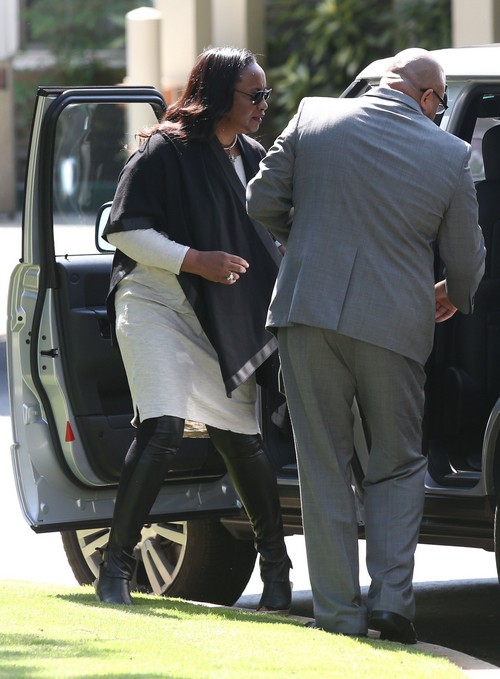 Is Bobbi Kristina Brown dead? Rumors on the Internet say that Bobbi might have died as a hearse has arrived at the hospice where Bobbi Kristina Brown’s death watch continues. The 22-year-old has been hospice for nearly 3 weeks after being taken off all life support. The family has been making what appear to befinal visits to Whitney Houston’s only daughter, as the hospice prepares a hearse and privacy tent.

A mysterious tent has been put up at Peachtree Christian Hospice, where Bobbi Kristina has been spending her final days, TMZ first revealed. The structure is flush with the back of the building, blocking all views of what is likely the exit Bobbi Kristina Brown’s body will be removed from after her death. However, a breaking news report, also by TMZ, states the tent has nothing to do with Bobbi, after Pat Houston was seen making a late night visit. According to the report, the structure was simply erected to provide privacy for other patients and families entering and exiting the facility.

Another report by New.com.au confirmed the structure, covering part of Bobbi Kristina’s hospice facility, and spotted a hearse backing into the privacy tent. This appears to be an effort to prevent photographers and looming paparazzi from snapping photos of anyone, including Bobbi Kristina when the time comes.

Stronger efforts have been made to prevent the exploitation of Bobbi’s condition after TMZ broke the news a family member had snapped a photo of Bobbi Kristina Brown on her deathbed and was trying to sell the image. ET was also offered the Bobbi Kristina deathbed photo and revealed it was being shopped for $100,000. Both media outlets declined the extremely distasteful picture of Bobbi Kristina dying; ET adding it was too “unseemly” to print.

Over the last week friends and family have been flooding in to see Bobbi Kristina one last time. After the Brown family was banned, shortly after news of the grotesque deathbed image being shopped, both sides of the family along with trusted friends swarmed in on Wednesday. Whitney Houston’s former bodyguard, Ray Watson, was spotted visiting Bobbi. According to the Daily Mail, Ray spent nearly 30 minutes alone in his car after his visit. Tommy Brown, Bobby’s brother, also showed up for a visit. The bulk of the Houstons flooded in and out throughout the day, and Pat was seen leaving the facility with two large black bags.

What do you think of the tent appearing at Bobbi Kristina Brown’s hospice facility? Is Bobbi Kristina’s life coming to an end after months of fighting for her life?

Update: July 17 – Things can’t be going too well at the Hospice for Bobbi Kristina Brown as a second hearse has arrived. According to the Mirror the first hearse was black while the second was white. Could these hearses be for Bobbi or are they for other patients who might have passed away?

Friends and family visit Bobbi Kristina at the Peachtree Christian Hospice Care in Duluth, Georgia on July 16, 2015. A hearse was seen backing into a tent erected at the back door of the facility, which has brought about fears for Bobbi Kristina… A lawyer from Greenberg Traurig was also seen arriving at the hospice.

Friends and family visit Bobbi Kristina at the Peachtree Christian Hospice Care in Duluth, Georgia on July 15, 2015. Is the hospice where Bobbi Kristina has been hanging on to life for 3 weeks preparing for something? Bobbi’s legally appointed co-guardian Pat Houston said in a statement released recently: We thank everyone for their support and prayers. She is in God’s hands now. FameFlynet