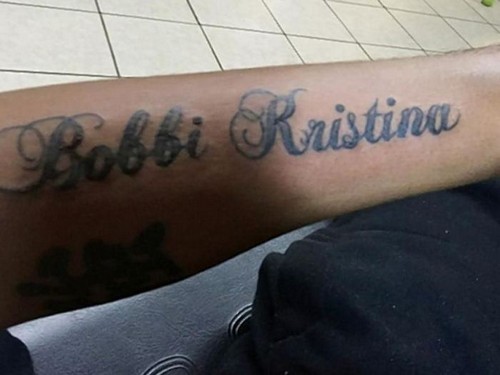 It seems Bobbi Kristina Brown, daughter of Bobby Brown and the late Whitney Houston, will remain on life support for at least a while longer. After reports that the 21-year-old woman would be taken off life support by the end of the week, Bobby Brown’s attorney made yet another statement to shoot down the rumors. He told Us Weekly that “the story was false in its entirety,” which seems to indicate that pulling the plug is not a part of Bobby Brown’s plans in the near future. The Brown attorney previously issued a statement dismissing reports that Bobbi Kristina would be taken off life support on the anniversary of Whitney Houston’s death last week.

As the Browns and Houstons try to think positive thoughts, Nick Gordon has found another way to keep Bobbi Kristina on his mind. According to reports, Nick recently got a tattoo that reads “Bobbi Kristina” on his left forearm and he posted a pic of the fresh ink on Facebook. The photo didn’t have a caption, but it was presumably Nick’s Valentine’s Day gift since he posted it the day after the romantic holiday. Perhaps Nick’s trying to keep up appearances after becoming the target of the criminal investigation surrounding Bobbi Kristina’s incident. Rumors have been swirling of Nick’s involvement in Bobbi Kristina’s drowning since she was found unresponsive in the bathtub of their Georgia home. It’s safe to say that a tattoo isn’t going to prove much of anything one way or the other.

What do you think about the news that Bobby Brown has no plans to take Bobbi Kristina off life support? How long do you think they’ll keep her alive? What about Nick Gordon’s new tattoo? Is it a symbol of his love or an attempt to get the public on his side? Let us know what you think in the comments below and don’t forget to check CDL often for the latest updates on Bobbi Kristina Brown’s condition.