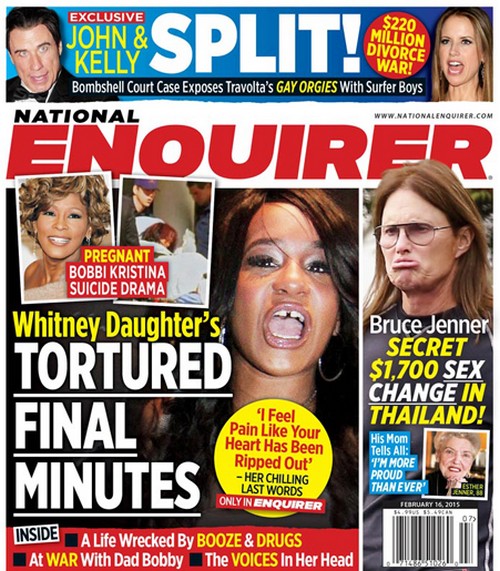 Bobbi Kristina Brown continues to lie brain dead in the hospital, with extremely low chances of recovery. Now rumors that she pregnant and attempted suicide are being reported. Questions surrounding Bobbi’s mental state have been circulating over the past few days, especially since police found drugs hidden in her house when they conducted their sweep. It’s clear that Bobbi was dealing with a serious booze and drug addiction, but a new report from the National Enquirer adds that Bobbi was also secretly pregnant.

Pregnant, on drugs, and committing suicide? It’s a combination we see far too often, especially when drug addictions run in the family. We all know how Whitney Houston died, and it’s clear that Bobbi Kristina Brown never recovered from her mother’s death. At the same time, it was also a case of like mother, like daughter, no? One would think that after Whitney’s death, Bobbi’s husband, Nick Gordon, her father, Bobby Brown, and everyone close to her would do their utmost best to keep her away from all these negative influences. But if Bobbi was pregnant and drinking and doing drugs, then clearly her suicide didn’t come out of nowhere.

The Enquirer also claims that her difficult relationship with her husband, Nick Gordon, and her father, Bobby Brown, played a role in Bobbi’s deteriorating mental condition leading up to her suicide attempt. Apparently, she had ‘voices in her head’, and her last words were, “I feel pain like your heart has been ripped out.”

We’ll no doubt find out more as Bobbi’s condition changes – or doesn’t change – but it’s clear that there was a lot more to this story than anyone initially guessed. A surprise pregnancy, the cops finding drugs in her place, and now issues with her family? Not to mention anything else going on with her health, which the public has not been privy to.

What do you guys think about Bobbi Kristina Brown’s pregnant suicide attempt? Let us know your thoughts in the comments below.