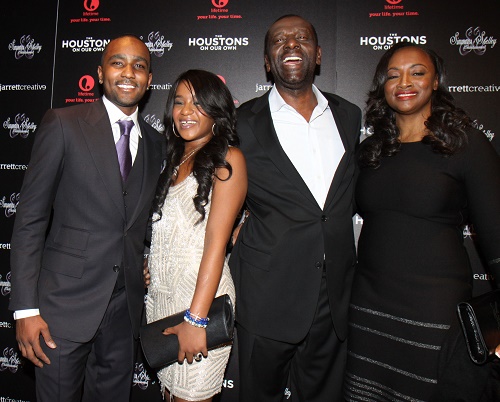 Bobbi Kristina Brown’s family is the epitome of a grieving group of people coming to terms with an unexpected tragedy – NOT. According to TMZ, Bobby Brown’s family members have been ‘grieving’ over Bobbi Kristina Brown’s current state… and also shooting a reality show at the same time. My, the grief must be eating them alive, if they’re able to buck up the courage and film a reality show during this trying period in their lives.

TMZ’s sources confirm that Bobby’s two sisters, brother, and their kids are shooting a reality show about their fascinating lives, and surprise, a large chunk of that will focus on Bobbi’s current medical situation. In other words, Bobby Brown’s family is taking full advantage of the media attention right now, and no doubt, Bobbi’s health will feature into a large part of their reality show. I mean, they’re not stupid – they know that people only care about Bobbi right now, so don’t be a surprised if a large chunk of the show is them standing around the hospital room, debating the ethics of keeping Bobbi on life support.

Of course, Bobby Brown is sitting this one out, even though the simple fact that he’s even letting this happen says enough. However, TMZ does state that there has been no filming at the actual hospital, and most of the ‘debriefs’ have happened while they’ve been at home – conveniently with a camera pointing right at their faces as they ‘deal’ with their grief.

What do you guys think? Wasn’t it sickening enough when all they wanted was Bobbi’s money, and now they’re trying to take advantage of her fame as well? Vultures, the whole lot of them. And the most disgusting thing is that they don’t even attempt to hide it, nor do they seem to care what the public thinks of them – beyond the fact that the public is thinking about them at all.