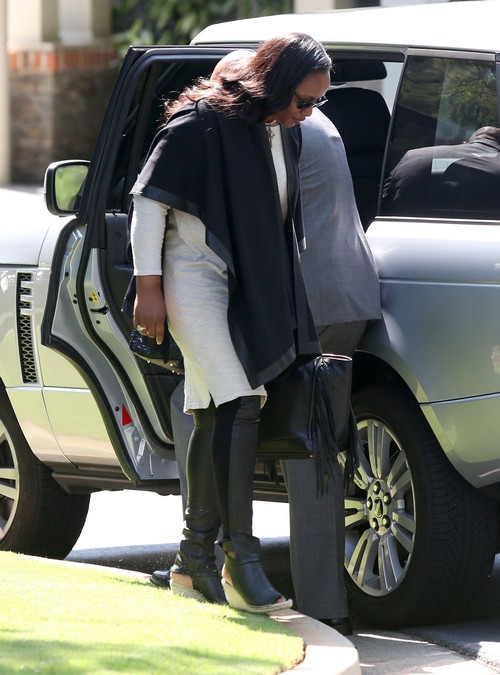 Bobbi Kristina Brown’s death is imminent according to new reports of the behavior surrounding the hospice where she is reportedly dying. Since Bobbi Kristina was found unconscious and face down, drowned in her bathtub, a death watch has been ongoing. The Brown family, the Houston family, and, sadly, a second hearse, have all arrived at Peachtree Christian Hospice, supporting the rumors that we could hear the news everyone has been dreading very soon – Bobbi Kristina Brown is dead.

The daughter of Whitney Houston and Bobby Brown has shown no significant signs of improvement and her body is actually starting to deteriorate, but she is “staying strong” after being moved to hospice on June 24, ET revealed. “Imminent death might not look that different from what you would see right now,” an expert shared with the media outlet.

Wednesday, buzz around the hospice in Atlanta heated up after a privacy tent was erected outside the back entrance and exit of the building. A black hearse pulled up to the structure, backing into the structure. TMZ later clarified that the tent had little to do with Bobbi; simply providing privacy for everyone at the facility, as media and photographers begin to camp out near the building.

Fears Bobbi Kristina is dead have been reheated with the arrival of a second hearse on Thursday. A white vehicle arrived at Peachtree Christian Hospice during a Houston family vigil, according to the Mirror. Bobbi’s family was spotted arriving at the center shortly before the appearance of the white hearse, sparking concern the 22-year-old has finally passed away.

The Mirror reached out to the hospice, but was told “there’s been no deaths” by a receptionist. No further comment was made by the facility. The media outlet also reached out to law enforcement who have been involved in security detail after Bobbi Kristina Brown’s deathbed photo was shopped. The police had not been informed of any “major occurrences” regarding Bobbi or in conjunction with the hospice.

It’s unclear if the arrival of the white hearse has anything to do with Bobbi Kristina Brown’s imminent death. As of this moment, no official comments have been made. We can only speculate, and the color of the hearse may mean nothing, but it might be interesting to note a gold hearse was used for Whitney Houston’s funeral.

Visitors at the Peachtree Christian Hospice Care in Duluth: FameFlynet