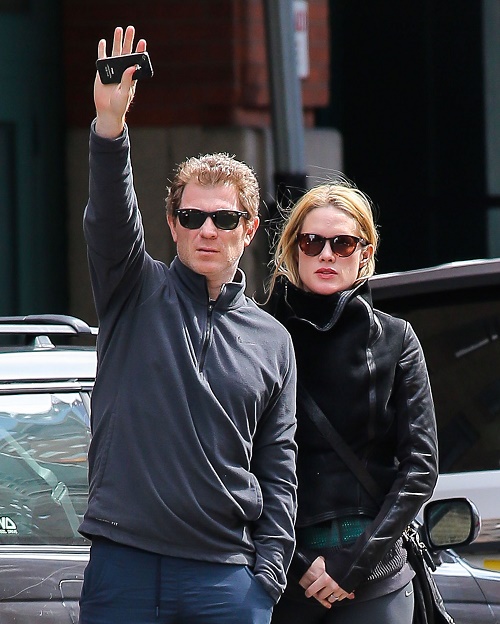 The divorce between Bobby Flay and Stephanie March is just getting uglier and uglier. This time, Bobby Flay took a shot at his estranged wife, and we have to admit, it’s pretty low. Bobby Flay is blaming Stephanie March’s latest claim on her choice to undergo plastic surgery on her breasts. TMZ reports that as part of Stephanie March’s argument to terminate their current prenuptial agreement, she says that she has been the victim of various medical problems that are well known to many, and have been publicized throughout the field in which she works. March claims that due to a burst appendix and three deep infections that are now public information, she is unable to find work as an actress and that their current prenuptial agreement would create a financial burden for her. Stephanie wants more money and her legal representation is being as creative as possible in coming up with reasons she deserves it.

Now, Bobby Flay is firing back against this claims in an attempt to shoot down Stephanie’s argument. His response is pretty low, even for Flay. He recently said that her infections are her own problem and that she is the cause of them as a result of her feeling as though she needed breast enhancement surgery. Basically, he is saying Stephanie needs to deal with her problems because it was her decision to go under the knife and now she must deal with the consequences.

Stephanie March has recently taken a few shots at Bobby Flay during this ugly divorce and we guess he was tired of hearing her and wanted to fire back. Stephanie March recently said that Bobby Flay compromised her health and mental state because of his alleged infidelity leading up to the divorce and this impedes her ability to earn as an actress.

We also recently reported that March feels that the prenuptial agreement should be renegotiated because, in her mind, she is the reason for the success behind Bobby Flay and his restaurants. Stephanie March claims that every dish on the menu was first made at their home, tested by her, and was not put on the menu until she gave it her seal of approval.

Their current prenuptial agreement gives March $5,000 a month, and with March believing that she played an instrumental part in building Bobby Flay’s empire, it is only right, in her mind, that she deserves more money in the divorce settlement. Honestly, it sounds like Stephanie March will make up any excuse at this point to try to renegotiate the prenuptial agreement and get a heftier divorce settlement. Bobby Flay meanwhile claims the breast enhancement plastic surgery gone wrong is not his fault nor his problem. Let’s see what she comes up with next.