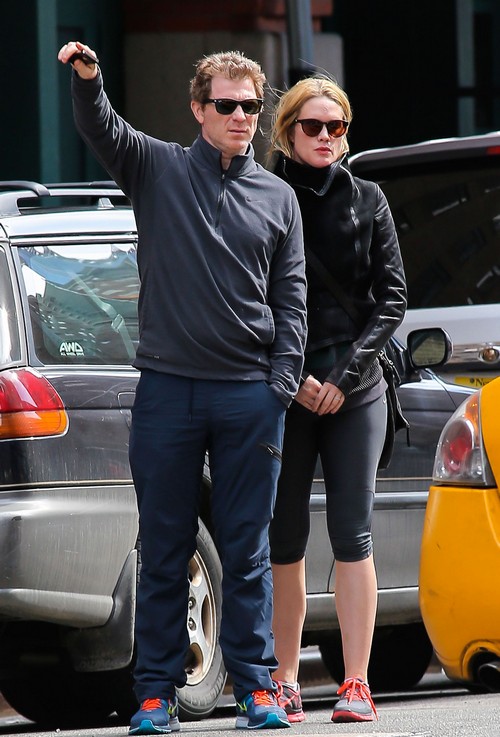 Bobby Flay’s divorce from Stephanie March is getting all kinds of ugly, especially with both Bobby and Stephanie insisting on a different version of events. Page Six and the New York Daily News has all been airing Bobby’s side of the story, and his reps are strategically leaking reports about how he’s ‘sad’ that their dirty laundry is getting aired to the public via Stephanie’s publicist. However, Stephanie managed to leak her side of the story to TMZ, and things are not as one-sided as they seem.

The main thing right now is that Stephanie March is absolutely ‘losing’ the financial aspect of the divorce, since [as per the prenup she and Bobby signed in 2005], she’s walking away with $5000 a month. However, she and her team claim that only $5k is deeply insulting given the fact that they have been married for so long, with Stephanie’s lawyer returning the $5k check to Bobby – and adding, “We regard the support provisions of the pre-marital agreement as unenforceable (not to mention morally reprehensible).”

Stephanie’s lawyer also claims that Bobby Flay was ‘bullying’ her by cancelling the credit card she used to buy household items, and also pressuring her to release a statement saying that the divorce is amicable – when it’s clearly anything but.

Plus, Stephanie’s currently staying in her marital home with her sick mother, but Bobby is threatening to boot her if she doesn’t sign a settlement – in which case she would ‘lose’ and have nothing left to fight him on. Plus, the two are accusing each other of being unfaithful, but it’s more than obvious that the crux of this issue is financial – and that Stephanie is fighting the grounds on which the prenup was written, including the prenup itself.

Stephanie March doesn’t want to walk away with only $5000 after all the effort she put into their marriage, and she especially doesn’t want to be kicked out of a house that she’s sharing with her sick mother. But Stephanie’s getting the short end of the Bobby Flay stick here, just because she’s not as famous, not as powerful, and really, not as rich.