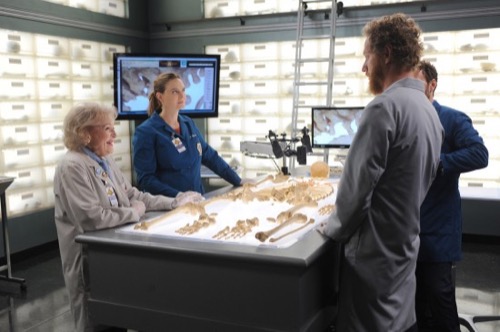 Tonight on FOX Bones airs with an all new Thursday October 22, season 11 episode 4 called, “The Carpals in the Coy-Wolves,” and we have your recap below. On tonight’s episode a real-estate agent’s remains are discovered in a forest and show signs of being partially devoured by coyote-wolf hybrids.

On the last episode, remains found at a fish farm coincide with Brennan and Booth returning to their jobs at the Jeffersonian and the FBI, respectively, and it’s revealed that some of the victim’s organs were harvested before he was dumped in the water. Meanwhile, Hodgins urged Angela to exhibit her photographs; Cam dealt with her decision to choose work over romance; and Booth found Aubrey in his old office. Did you watch the last episode? If you missed it, we have a full and detailed mid-season finale recap right here for you.

On tonight’s episode as per the FOX synopsis, “a real-estate agent’s remains are discovered in a forest and show signs of being partially devoured by coyote-wolf hybrids, so Brennan solicits help from an older, distinguished forensic anthropologist, who amazes the staff with her decades of experience and surprising knowledge of fantasy football, with which the victim was heavily involved and even linked him to a social-media feud with an NFL star.”

Tune in at 8PM EST on FOX to watch Season 11 Episode 4 of BONES. We’ll also be updating fans right here as the show airs so be sure to check back in with us. Brennan and Booth have had a long television run. Do you like that their characters mix up business with home life? Hit up the comments and tell us your thoughts about their tangled relationship!

A father and son were out on Blue Ridge Mountain when they came across some remains. However just a second before they saw the body, the father had been telling his son to stop worrying about whether or not he DVR Fashion Runway and just give in to nature. So the son’s first instinct upon hearing his father yell like a girl was to shoot at whatever that had disturbed him. And he ended up spraying the poo victim’s skull all over the scene.

In fact Bones and Booth had to walk over all the little fragments while they continued their argument from earlier. It seems Bones had been planning on killing the Agent Andy character in her books and Booth was taking it kind of personal. Agent Andy had been based off of him and so he wondered why his wife felt it was ok to kill him in fiction.

Though his partner Aubrey on the other hand thought it was funny. He found out that Agent Andy was going to be replaced by someone new, hot, and younger. And he told Booth to pass on the message that he was honored to be her latest inspiration.

Yet in all seriousness the guys’ case was proving to be a problem. Angela had trouble with getting an image of the victim’s face seeing as all she had to work were pieces. So she was having trouble with identifying their victim and Bones couldn’t help her on the remains because coy-wolves which are a coyote and wolf hybrid had chew through most of her evidence.

So Dr. Beth Mayer entering the picture the moment she did proved to be a godsend. Subsequently Beth had been highly recommended by Bones as an experienced doctor in her field and thus Beth had a lot of experience on the job. She helped Angela rearrange the fragments she had until she found a facial recognition and their victim turned out to be Justin Ross of Franklin Realtors.

Now there was nothing to be found out his job but an office temp did Aubrey that the only life Justin had outside of work was wrapped up in Fantasy Football.

Well Aubrey didn’t think anyone could get heated up enough to kill over Fantasy Football yet Dr. Beth and Bones found out a little something about their victim. He won his league’s last cup and that meant he got to humiliate the loser. And Justin chose to make his friend were antler ears and hunt him in the same woods he himself was later murdered in.

The man that Justin had embarrassed was Craig. The same Craig who was so obsessed with the Fantasy Football League that he was currently in the middle of making a trade when Aubrey stopped by to ask him about Justin. Only Craig didn’t seem to care about getting hunted with a paintball gun. He said that was all part of the league. But he did tell Aubrey that Justin had a huge twitter fight with a pro-football player that ended when the player said he was going to pay a Justin a visit in person on the day he died.

And then later the football player told both Aubrey and Booth that he had dropped his grudge. He did go to see Justin but Justin had been in such a good mood that he heartily apologized to the other man.

The feds were told that Justin last words to the man he made peace was that he had hit the jackpot. So the guys looked into the league to see who might have lost money to Justin yet that didn’t give them anything. The Commissioner didn’t appear to have answers for them and he honestly hadn’t had a clue that one of his own could have been Justin’s killer.

So Aubrey and Booth had to take a second look at what they already had and they found a red flag against the office temp. Justin had once worked on his foreclosure and there had been a chance to save the man’s house. But then Justin was late to a meeting and the foreclosure went through.

However the temp claimed innocence and again he pointed the feds into a direction. The woman that Justin had been seeing was actually Craig’s wife. And so back at the lab, the doctors were trying to figure out if the evidence they had accumulated would point to Craig. Thereby sealing the case.

See, Hodge and former squintern now Dr. Owen went out into the wood together because Mayer had told Owen it would do his erectile dysfunction problems some good. And you know to find the bones that the coy-wolves might have passed. So Bones was able to form a full skeleton back at the Jeffersonian.

And what she found out was that their killer had used a two prong weapon that just happened to have cured pork on it.

So their killer wasn’t Craig and Craig was most likely telling the truth when he said he tried to trade a quarterback with Justin as reparation for the other man sleeping with his wife. And the killer turned out to be the Commissioner of the league. He worked in fast food joint and had access to the murder weapon.

He later said Justin was attempting to encroach on his league and the way he ran it. So he killed him for the good of the league.

And as for Bones, she had moments when she grew to be jealous of Mayer but it was Mayer’s advice that ultimately saved Agent Andy. Bones had written her book after she and Booth had retired and so that explains why she unintentionally lashed out. Mayer said she was bored.

One of the things that brought Booth and Bones together was the excitement so Mayer told her to never let that go.