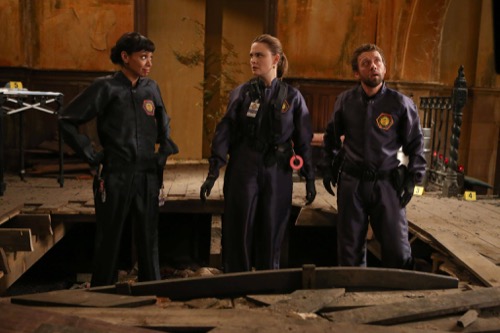 Tonight on FOX Bones airs with an all new Thursday October 29, season 11 episode 5 called, “The Resurrection in the Remains,” and we have your recap below. On tonight’s episode, a case involving a 200-year-old headless corpse gets some help from Ichabod Crane (Tom Mison) and FBI agent Abbie Mills, (Nicole Beharie) who travel from Sleepy Hollow to claim the body, but wonder what it has to do with a contemporary murder victim.

On the last episode, a real-estate agent’s remains were discovered in a forest and show signs of being partially devoured by coyote-wolf hybrids, so Brennan solicits helped from an older, distinguished forensic anthropologist, who amazed the staff with her decades of experience and surprising knowledge of fantasy football, with which the victim was heavily involved and even linked him to a social-media feud with an NFL star. Did you watch the last episode? If you missed it, we have a full and detailed mid-season finale recap right here for you.

On tonight’s episode as per the FOX synopsis, “It’s Halloween time at The Jeffersonian, as the team gets a surprise visit from newly minted FBI Agent Abbie Mills (guest star Nicole Beharie) and Ichabod Crane (guest star Tom Mison), who have traveled from Sleepy Hollow to claim a headless body already under investigation by Brennan and her team. The new foursome must figure out how to work together to discover who the 200-year-old headless corpse is, and how it is linked to a contemporary murder victim. Meanwhile, Booth and Brennan come up with the ultimate Halloween pranks to play on each other.”

Tune in at 8PM EST on FOX to watch Season 11 Episode 5 of BONES. We’ll also be updating fans right here as the show airs so be sure to check back in with us. Brennan and Booth have had a long television run. Do you like that their characters mix up business with home life? Hit up the comments and tell us your thoughts about their tangled relationship!

Two kids were going to through the Halloween party of a lifetime. They found this old abandoned church and, honestly, it had everything. Cobwebs, a creeping feeling, but as it turns out it also housed a corpse. So rather than a party there, the kids ended up calling 911 and the local police called for the Jeffersonian.

Which leads us to Bones and Booth. The couple seemed to be in a middle of disagreement about how their kids should celebrate Halloween when they got the call. Apparently Booth had gone out to buy a bunch of candy to hand out to the neighbor’s kids and Bones personally/ scientifically felt that the candy was hazardous to kids’ health. So she probably was going to hand out raisins again this year, but seeing as the last time they did that they got their house egged, Booth was standing firm on handing out candy.

However that conversation was soon benched after their call. So later they walked in on their crime scene and, while they expecting to see the body of a decomposing young woman, no one had known at the time that their victim just happened to be lying not far from a mortsafe.

Now the mortsafe used to be how people were buried back in the day. It was an old custom iron coffin that was created to prevent people from robbing graves. And inside that particular mortsafe they found what appeared to be another victim.

The Jeffersonian team had found the body of redcoat soldier from the American Revolution and oddly he was missing his head. So on top of investigating the death of Sarah Lippman, a medical student, they also wanted to find out why she had been looking for that solider. The same soldier that somehow managed to draw the interest of Agent Abbie Mills and her partner Ichabod Crane.

Abbie and Ichabod had wanted the body of that soldier. But the Jeffersonian refused to hand it over. Especially as they believed the remains might have played a part in why Sarah their victim was killed. So both teams came up with a compromise. Mills was going to work with Booth on the investigation end and Ichabod was going to stay with the squints at the Jeffersonian. And to their astonishment, Ichabod proved to a fountain of information.

Angela had identified their second victim as General William Howe and, what do you know, Ichabod had some information about him. He told Angela and Bones that Howe was infamously known for his cruelty. Yet Bones wanted to know why a soldier that had reportedly been buried in England was found in an old abandoned church in the states. So right about that time Ichabod began keeping mum.

He would share a few pieces of information but he would never reveal all. Not even when Booth and Aubrey found out their victim Sarah had been looking into the skull of that soldier because she heard she could resuscitate the dead with it. See the other guys thought that was just a myth, but Abbie and Ichabod felt differently.

And Sarah believed in that “myth” so much that there was evidence she was the one to dig up Howe. They found the tools at her apartment and in the lead up to something so stupid there was another incident. Sarah had gotten friend and fellow med student to purposely stop and restart her heart. So clearly Sarah had become obsessed with what happens after death and the skull merely got wrapped up in her obsession.

Yet Cam found out something back at the lab. She and Wendell took a second look at their victim Sarah’s body and they realized she was beaten to death with the skull. So there must have been someone upset with her for digging up the body.

Though to be fair Sarah wasn’t all that bad of a person. Sure, she took her interest with death a little too fare but that’s came about when it was later revealed that she had lost her sister. And from all evidence the sisters did seem to have been close prior to death being the thing to tear them apart. Hence, her sister was most likely the reason Sarah went looking for that skull in the first place. She simply wanted to bring her sister back.

But Ichabod eventually came up with evidence of a piece of paper written by George Washington. (I know right) And so he had enough evidence on his side to take custody of the body of Howe thereby leaving the Jeffersonian only a little amount of time to catch their killer.

They knew the skull had been their murder weapon and they did find it the end but they didn’t know how to connect it to a killer until Ichabod informed them that Howe once a porcelain tooth. Porcelain tends to shatter so they found DNA left over from their killer when he grabbed hold of the head. And so the killer was revealed to be Joel who was Sarah’s boyfriend.

Apparently Sarah had conducted the death experiment on him and he didn’t have the same experience as she did. He later told Booth that he didn’t see anything waiting on the other side and before then he had faith. But when Sarah took that faith away – he killed her.