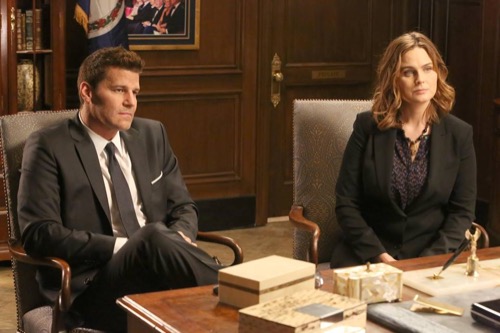 Tonight on FOX Bones airs with an all new Thursday November 19, season 11 episode 8 called, “High Treason in the Holiday Season,” and we have your recap below. On tonight’s episode a political journalist is found dead after writing an article exposing corruption at the NSA, and Hodgins (TJ Thyne) becomes paranoid when he’s convinced their investigation is being closely monitored.

On the last episode, an escape artist’s body was found in the woods, and it’s revealed that he had enemies in the magic community. Meanwhile, Brennan and Booth asked their friends to opine on their tooth-fairy debate; and Angela continued to work on her photography with Sebastian Kohl. Did you watch the last episode? If you missed it, we have a full and detailed mid-season finale recap right here for you.

On tonight’s episode as per the FOX synopsis, “a political journalist is found dead after writing an article exposing corruption at the NSA, and Hodgins becomes paranoid when he’s convinced their investigation is being closely monitored. Meanwhile, the team gathers for Thanksgiving; and Brennan plans a surprise for Booth.”

Tune in at 8PM EST on FOX to watch Season 11 episode 8 of BONES. We’ll also be updating fans right here as the show airs so be sure to check back in with us. Brennan and Booth have had a long television run. Do you like that their characters mix up business with home life? Hit up the comments and tell us your thoughts about their tangled relationship!

The body of Vivian Prince had been found on an upscale golf course and unfortunately it seems that everyone had a pretty good reason to dislike her. And want her dead!

On tonight’s episode of “Bones” the Jeffersonian was looking into the death of a political reporter that had recently released one of her biggest stories to date. Apparently the victim had taken what Edward Snowden did and had decided to go even with leaking files on the NSA including information about their hit squad Greystream Solutions. So naturally the feds’ instinct demanded they suspect the NSA but that’s not where they began their investigation.

First they had to look into Vivian’s ex-husband. He more than anyone else would have a reason to kill her. For not only did the divorce sorely reduced his living standards but his wife had been looking into reducing her ex’s alimony payment as well.

Sal Raymond was a man that never reached the heights he could only dream of. Like Vivian, he had gone into writing yet unlike her he was less successfully into breaking into the sports world. So he had to write about third rate teams and earn a lot less money. And then that was his career – a rut.

However Sal said he had been the one that wanted to decrease his alimony. He said he had a realization that his life wouldn’t get better until he learned to stand on his own two feet. And plus he had been out of town when Vivian died which turned out to be a good thing because if he had hired someone then that person would have at least done a better job.

When Booth and Aubrey finally got around to talking to the NSA, the man they were sent decided to answer their questions (hypothetically that is) and he said it couldn’t have been them. They would never have a left a body where it could be found and on top of that Vivian’s death had been amateur. A fact the lab had backed up but hadn’t spoken to anyone about.

So Hodge later installed a policy in the lab. He said no cell phones and if they were going to discuss the case then they had to either whisper it or write it down.

And Booth decided to follow that policy even when he was in the car with his wife. Though that had more to do with thanksgiving than with the case. It turns out this year Bones wanted to make a foturkey rather than the real thing. She said it was healthier and less of a hassle.

Yet Booth being Booth, he wanted a real turkey so that he could stuff his mouth and then promptly pass out in front of the television. So this year Booth suggested they invite as much people as they could and that way none of the turkey (if they had it) would go to waste. And that’s how Aubrey got his invitation.

No one could complain about too much leftovers with Aubrey around!

But back to the case, the feds found where Vivian had been murdered. It seemed she frequented a hotel that was miles away from the nearest cell service and that initially blocked all signal including wifi. So not only was it the perfect place to murder someone but it had also been perfect for Vivian to meet up with her source “The American”.

So Hodge and Cam tried to run the fluids and prints they found at the scene. And they initially thought it was mere stupidity that their NSA watchdog had touched everything. Though it eventually occurred to Hodge that maybe Ryan Gill had many so many mistakes was because he was trying to hide the fact he been to the hotel before.

And that’s how he knew Gill was “The American”. A treasonous crime that Booth ended up arresting Gill for and the murder charge came afterwards.

Gill you see hadn’t thought Vivian would literally print everything she had read. He had hoped she would keep certain things out of the press like the names of thousands of operatives who life she would have been risking. Yet he had been wrong and Vivian had wanted to print a story the bigger the better.

Her editor wanted to replace her with someone younger and so she used Gill to keep her career alive. And he killed her in the end once he finally saw her for what she was.

But after they had wrapped up the case, Bones decided to make turkey so Booth got to enjoy that along with the surprise visit from his son Cooper. And Hodge found the last couple of Vivian’s files though he didn’t want to use them to expose the evil government. He simply wanted to destroy them.