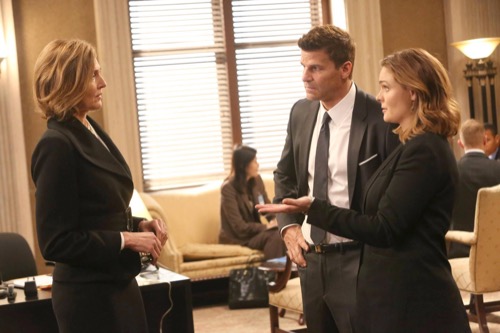 Tonight on FOX Bones airs with an all new Thursday November 5, season 11 episode 6 called, “The Senator in the Street Sweeper,” and we have your recap below. On tonight’s episode the body of a U.S. senator is found in a street sweeper by an unusual pair of sanitation workers.

On the last episode, a case involving a 200-year-old headless corpse got some help from Ichabod Crane and FBI agent Abbie Mills, who traveled from Sleepy Hollow to claim the body, but wondered what it had to do with a contemporary murder victim. Meanwhile, Brennan and Booth surprised each other with Halloween pranks. Did you watch the last episode? If you missed it, we have a full and detailed mid-season finale recap right here for you.

On tonight’s episode as per the FOX synopsis, “the body of a U.S. senator is found in a street sweeper by an unusual pair of sanitation workers. Meanwhile, Aubrey pursues a relationship with “squintern” Jessica, but he also secretly digs into her past to make sure there are no skeletons in her closet that could ruin his dreams of a political future.”

Tune in at 8PM EST on FOX to watch Season 11 Episode 6 of BONES. We’ll also be updating fans right here as the show airs so be sure to check back in with us. Brennan and Booth have had a long television run. Do you like that their characters mix up business with home life? Hit up the comments and tell us your thoughts about their tangled relationship!

The fragments of what was once Senator Rick O’Malley’s bones were found in a street sweeper. It seems the guys driving the vehicle at the time hadn’t known what was slowing them so they lifted the hood and ended up finding the good senator.

Though, unfortunately, that wasn’t just a play on words. Freshmen Senator O’Malley really was one of the good guys. He started out his career in the blue collar filed and then eventually worked his way into getting elected at the Senator of Virginia. All the while never forgetting his roots or that his priority had to be his constituents.

So the fact he was murdered quickly became media fodder. In fact Booth and Aubrey even didn’t get a chance to notify the widow before the news vans outside started to show. And inadvertently alerted her to her new situation.

Yet the widow handled everything with grace. She said she loved her husband but at the same she wasn’t blind to his faults. And she believed his biggest fault happened to be his very close relationship to the female Senate Majority Whip. Often her husband was busy doing something with Senator Hayley Winters and after a few months had passed – Lynnette O’Malley began to think her husband relationship with his boss was less about what was best for the Democratic Party and tawdrier in nature.

Only Lynette was wrong about the affair. For while she had a reason to have some misgivings, Rick hadn’t been cheating on her with Senator Winters. If anything the two had a big blow-out right before Rick’s death because Winters demanded he change his vote on an upcoming bill that would have stopped men in his district from losing their jobs.

Therefore Winters was considered a viable suspect. That is until her alibi for the night in question panned out.

She did see Rick on the night he was murdered but that was because they both attended a charity function. And once she told him that he had to change his vote to play with big boys, he didn’t stick around to finish his dinner. Instead he went somewhere else to eat and judging by his stomach content it was an Indonesian place.

But before Rick went to dinner, he had been relayed by a union boss who had gotten into his face. So Aubrey and Caroline had a little chat with that union boss, a Mr. Frankie Cesari, and they demanded to know what the two were arguing about. And it turns out it was the vote.

It was Frankie’s people that would be laid off if the bill went ahead and he wanted to remind Rick of that. But Rick said he hadn’t made up his mind about his vote so that had gotten Frankie angry. Though not angry enough to kill. Just to run home and start calling up his people so that they were ready to go on strike at a moment’s notice.

And after Rick had a conversation with Frankie, he did go on to that Indonesian place where his taxi driver remembered him embracing a young woman out front. So at first Caroline, who was still at the office at the time, thought the widow was right about the affair but wrong about the mistress. Only Bones later corrected the misconception when she saw Anissa Green.

Anissa who works at an Indonesian restaurant as a waitress also looks very much like her late father – the senator. It seems she was conceived from a one-night stand during the senator’s youth and she had been put up for adoption. Yet she tracked down her biological parents after she turned 18 and her records were unsealed.

So that’s how she was able to meet Rick and form a relationship even if she didn’t want it to become public that she was the illegitimate daughter of a senator.

But what Anissa could tell Booth and Bones was that her father had discuss with her the vote. And it looks like it was killing to him to vote against his conscience. So his daughter had told him to follow his gut and do what he believed was right.

And it turns out he was going to up against his party. So the FBI had their motive and the squints back at the Jeffersonian had helped them to figure out the murder weapon. Therefore all that was left was identifying their killer and Bones told Booth that their killer was going to have a leftover blue scar from when they killed the Senator with rock statue of the state of Virginia.

Although neither Senator Winters nor Lynette O’Malley had a scar but Rick’s chief of staff was revealed to be the killer.

It seems Eric had been having an affair with Lynette and he decided to kill Rick after Rick admitted he was going to vote against the upcoming bill. So Eric thought why not kill Rick and let Lynette have her own career thanks to the Widow Mandate. The Widow Mandate was when the governor appointed the widow of a deceased Senator to take over his seat for any oncoming elections. And it would have given Lynette the power to help out the Democratic Party as well as start her own career with Eric right by her side.

But Lynette had loved Eric as much as he thought so she didn’t stand by him after his arrest. And it was Eric’s very own actions that made the governor choose to go in another direction in replacing Rick in office. The Democratic Party had come together and they thought Lynette was too scandalous to be attached to their ideals.

Yet, besides catching a killer, there was another important event that occurred. Aubrey admitted that he would like to run for senate one day but he didn’t let his dream come in the way of him dating squintern Jessica Warren.

She has a lot of things in her past but Aubrey was looking forward to seeing if they have a future.