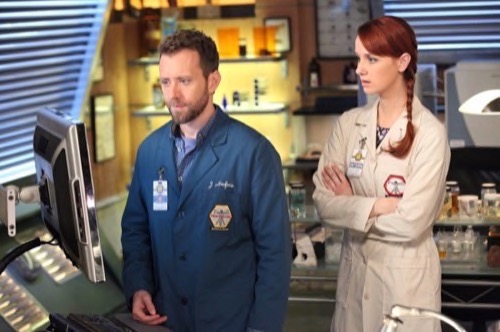 Tonight on FOX Bones returns with an all new Thursday April 23, season 10 episode 15 called, “The Eye in the Sky,” and we have your recap below. On tonight’s episode, a high-stakes gambler’s remains are discovered in an industrial shredder, but Booth’s [David Boreanaz] history of addiction comes into play when he and Brennan [Emily Deschanel] investigate the world of underground poker.

On the last episode, the Jeffersonian team unraveled an unexpectedly competitive world of mini-golf as they tried to piece together the murder of the sport’s superstar. Meanwhile, Brennan was worried her father Max (guest star Ryan O’Neal) was reverting to his criminal tendencies and “squintern” Wendell Bray (guest star Michael Grant Terry) enlisted Hodgins to help him fix his girlfriend’s family heirloom. Did you watch the last episode? If you missed it, we have a full and detailed mid-season finale recap right here for you.

On tonight’s episode as per the FOX synopsis, “a high-stakes gambler’s remains are discovered in an industrial shredder, but Booth’s history of addiction comes into play when he and Brennan investigate the world of underground poker. Meanwhile, Hodgins invents a lab-related product; and Brennan and Booth get some exciting family news.”

Tune in at 8PM EST on FOX to watch season 10 episode 15 of BONES. We’ll also be updating fans right here as the show airs so be sure to check back in with us. Brennan and Booth have had a long television run. Do you like that their characters mix up business with home life? Hit up the comments and tell us your thoughts about their tangled relationship!

There’s a reason for good cheer, all around, on tonight’s all new episode of “Bones” and it wasn’t for the horrible disfigured body then maybe things could have stayed that way.

It was revealed tonight that Bones and Booth are pregnant. Apparently they got one of those plus signs on an at-home pregnancy test and ever since that Booth has been bursting to reveal their news. But, according to Bones, it’s too early in the pregnancy to say anything and that, for now, their good news has to stay between the two of them. And in the meantime, while they’re trying to hide said news, both Booth and Bones have been surprisingly pleasant to everyone.

Which is fine for Booth even if it does confuse a squintern but when Bones is also in a good mood then everyone around her begin to suspect something is up. And no shocker there that Angela ended up getting answers before anyone else.

See, Angela knows Bones the best out everyone else at the lab. So all she had to do was ask her best friend for a hug and then pay attention to what follows. And as it turns out, she was right. Bones was experiencing some sensitivity in her chest area and that was a common symptom of pregnancy.

So, despite their ban, Angela knows and if Booth continues to prevent Bones from going to any crime scene then soon others will begin to come to the conclusion as well. It’s not like Bones has ever had any sensitivity to dead bodies. And that includes heavily mutilated ones.

Their victim’s remains were found in an industrial shredder. Though before his untimely death, Jeff was once a recover gambler who recently fell off the wagon when his wife and son died. So in order to investigate the circumstances surrounding this man’s death – Booth is going to have to reenter a very dangerous world for him.

Prior to this case, Booth has been doing really well battling his gambling addiction. But he seems to watch the boundaries of that and Aubrey for one didn’t want to see it. So when Booth said he was going to go undercover in an underground gambling ring – Aubrey decided to step away from the case and leave the other man to it after he realized he couldn’t convince Booth to do the same as well.

And finding out about Aubrey has only frightened Bones.

She feels like Booth shouldn’t go into the game alone and without backup. Yet the fact that Aubrey had felt it was too risky for Booth has now made her feel the same. And so Bones tried to talk her husband out of going and he went anyways.

Booth went to the game and he played for hours. In other words continuing to do so even after he had already gotten all the information he needed. So when he returned home, Bones grilled him about his night back at the tables.

She simply wanted to know what he did and really all she needed was his reassurance that he hadn’t pushed himself too far.

But Booth was testing it. And there was a part of him that desperately wanted to go back to the game. He and Aubrey had later checked out all the names of the people he played against and it appears that on paper they were clean. So clean in fact it would have been impossible to get a warrant.

Thus Booth somehow talked everyone into allowing him to go back. He claimed he needed more evidence and unfortunately his friends couldn’t find anything significant with their own search back at the lab. Hodge and Jessica were able to find out where their victim had possibly died but seeing as they were low on suspects – Booth needed back into the game. You know to give himself another chance assess the underground gamblers one more time.

And because people that cared about him were worried – they pushed themselves into solving the case as soon as possible in order to extract Booth at the very first opportunity.

The lab rats figured out their victim has been killed with baseball bat and that left the high school coach as their main target. So they worked off of that information and the moment they realized they could prove what they believed – they called Booth. Though Booth didn’t want to be pulled from the game so early. And was going to ignore his wife’s call when finally the part that remembered all he had to lose – eventually won out.

So Booth was saved from the brink and afterwards he made a call to his sponsor.