Brad Pitt Cheating With Sienna Miller: Angelina Jolie Convinced Husband Will Be Unfaithful On ‘The Lost City Of Z’ Set 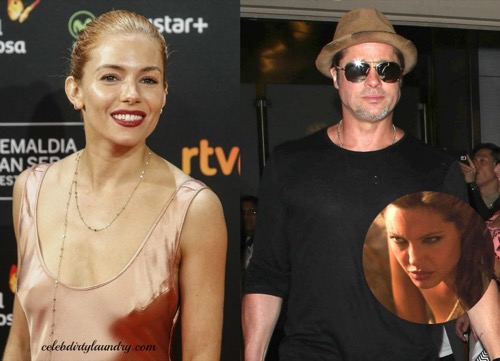 Is Brad Pitt cheating on Angelina Jolie with Sienna Miller? Not yet, but Angie is convinced that he is going to. It really is a miracle that Angelina Jolie and Brad Pitt haven’t filed for divorce yet. Even if neither of them have heated on each other (which is highly unlikely) – they seem to drive each other absolutely insane with their jealousy and insecurities. This week’s edition of In Touch Magazine reveals that Angelina is allegedly done cheating on Brad for now, but she is convinced that he is trying to cheat on her with the gorgeous Sienna Miller.

Brad Pitt began working with Sienna Miller on their new project “The Lost City Of Z” in August 2015, and ever since Angie is convinced that Brad and Sienna are “more than just friends.” Although Brad turned down a role in the film, he still wants to help out with production. Recently Brad wanted to visit the set of the movie in North Ireland, and his insecure wife absolutely forbade him from doing so.

In Touch Magazine’s source dished, “Angelina has heard Brad bring up Sienna’s name almost every day since the film went in to production in August. Brad told her to let him do his job as a producer, and Angelina yelled that she didn’t want him near Sienna. They barely spoke to each other the next day.” Is Angelina just being paranoid – or does she have reason to worry? Sienna recently broke up with Tom Sturridge, and she does have a reputation of hooking up with her co-workers while filming. Of course, the fact that Brad hooked up with Angelina while filming and cheated on his wife isn’t exactly helping Angie’s insecurities any. Once a cheater always a cheater – right?

Do you think that Brad would cheat on Angelina with Sienna if he had the chance? Or is Angie just being paranoid? Could her insecurities wind up driving Brad right in to Sienna’s arms? Share your thoughts in the comments below!

Actors on the set of ‘The Lost City Of Z’ in Belfast, Ireland!  Image credit : FameFlynetUK/FAMEFLYNET PICTURE