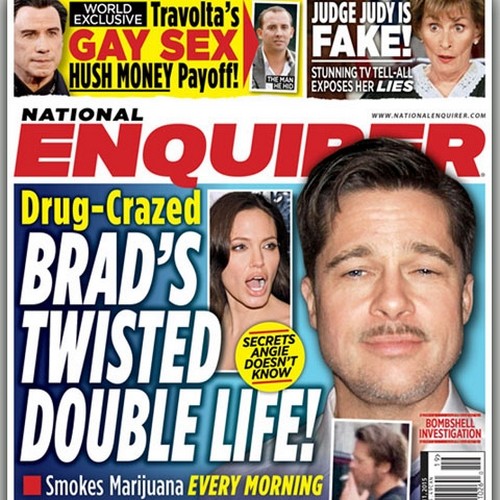 The Enquirer’s ‘source’ claims that even though Brad pretends to be a loving father and devoted husband to the public, he’s actually been concealing a different side of himself from his family and his fans. The source explains, “Brad has fooled everyone for years! But he’s actually a hypocrite! What he says and does behind closed doors are often two very different things!”

Apparently, Brad takes every chance he can get to smoke pot, whether it’s on a film set or even when he’s at home with his family. The source adds, “You’d walk into his house, and there were different grades of dope and lots of bongs and smoking paraphernalia on a table. Brad once came in and spent $1,500 on a dozen bongs to give to the crew of a film he’d just finished.” And if that wasn’t bad enough, Angelina Jolie reportedly found out and read him the riot act, telling him that she’s doing so much to keep herself health, and yet, Brad keeps taking it all for granted.

Well, there’s been a lot of research done into the connection [or lack thereof] between smoking marijuana and major health concerns, but regardless, it is a blatant sign of disrespect to his wife who just had to undergo a double mastectomy and various other complicated medical procedures.

Now, the whole weed thing – completely believable, especially given Brad Pitt’s history. However, the report also claims that Brad has been ‘playing coy’ with co-stars and other actresses on his movies, and this is where the report starts getting hazy. The reports about Brad Pitt from set have always been nothing but professional, and if he really was being even remotely sleazy, trust me – we would have heard about it.

What do you guys think about Brad’s double life of sex and drugs? Let us know your thoughts in the comments below.