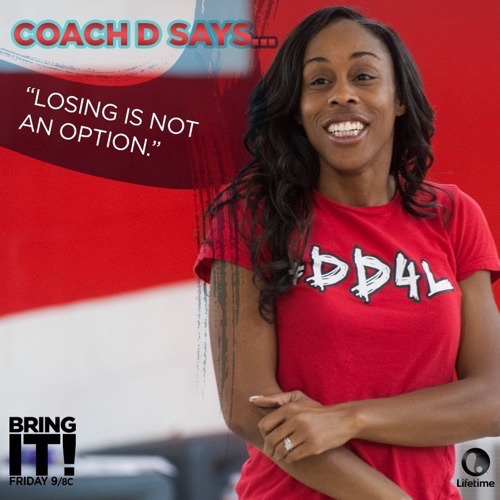 On Lifetime tonight Bring It! airs with an all new Friday March 13, season 2 episode 8 called “Traci’s Revenge,” and we have your weekly recap below. On tonight’s episode, Coach Traci and the YCDT Supastarz return to Mississippi looking for revenge after losing to Dianna and the Dolls the last time they battled.

On the last episode, after losing twice in a row to their hometown rivals, the Purple Diamonds, the pressure was on for the Dancing Dolls to take home a first place trophy this week, or risk losing their reputation as the best majorette dance squad in Jackson, MS. Meanwhile, Camryn struggled after Miss D tapped her to represent the team in the solo category and Tawantza pressured her daughter ZaTia to step up her game after Dianna cut her from creative dance yet again.

On tonight’s episode as per the Lifetime synopsis, “Coach Traci and the YCDT Supastarz return to Mississippi looking for revenge after losing to Dianna and the Dolls the last time they battled. Meanwhile, Miss D steps up her game and creates one of the most elaborate routines she has ever choreographed, and Selena raises hell after Dianna cuts her twin daughters, Star and Sky.”

Competition is personal for some and unfortunately that might have made celebrated coach Dianna lose a little bit of her common sense on tonight’s all new episode. You see the Dancing Dolls are going to be competing at the Dance Explosion and this week they’ll be up against one of their biggest rivals, the YCDT Supastarz. Or in Dianna’s case Coach Traci.

The last time the two dance teams meant, things ended on a somewhat sour note after a Dianna used a man dressed like Traci in the routine. So this upcoming battle is more than just another competition. Especially, for Traci who kind of left feeling embarrassed after that earlier stunt.

This time Traci and her girls actually want to wipe the floor with Dianna and the Dancing Dolls. And in turn Dianna wants to once again have the Dancing Dolls dominate over the YCDT Supastarz.

But the ladies have each gone too far. Traci has pushed her girls to explicitly defeat one group of girls meanwhile there’s chance Dianna might have gone crazy. For her routine this week is what we can say is all over the place.

It was supposed to be about people in the psychiatric unit however the dancers were confused about what their coach wanted from them and even the moms, left watching everything out on the sidewalk, didn’t know what was going on inside. It was simply too much (technique and props) that Dianna was trying to cram into one dance. And so after both her twins were cut this week, Selena decided to stick up for them.

Because how can her daughters do well if they didn’t know what’s going on? Though, in truth they did know what was expected of them but according to Dianna, who was felt feeling like she had to defend herself; the twins have grown complacent. Star and Sky knew the dance – they just didn’t have the momentum or probably cared enough to do it.

So they were cut and like Dianna says all the time, once you’re cut that’s it. She doesn’t generally play around when it comes to her team. And she’s only going to pick the girls based on their dancing ability. Not because their mother complained!

This week the girls were going to be dancing in the Creative Dance and Stand Battle categories. And because they were expecting fierce competition, both the Dancing Dolls and the YCDT Supastarz were depending on secret weapons to one up the other team. But are the secret weapons going to be enough or too much?

The Dancing Dolls were going steal trick from the other team’s playbook and use guys in their routine. Dianna had found a talented young man named Andre and she thought he would take their dance to a whole new level. Yet, in practice, he was barely there for a minute before he hurt himself.

And as for the YCDT Supastarz, Traci brought in live percussion as her team’s secret weapon. Typically, everyone else dances to a prerecording so by bringing in live music Traci knew she was going to liven up the audience.

However, when competition day finally did dawn, Traci showed she had second secret weapon. Because last time Dianna called her out. And this time Traci showed the audience that if she was Grace Jones then she was a Grace Jones that knew how to dance.

Traci ended up dancing with her team during the Creative Dance portion and that made everyone in the audience go wild for the YCDT Supastarz!

Although, sadly, the Dancing Dolls just didn’t follow that up with a strong performance of their own. First off, they had low energy levels and secondly there were far too many noticeable mistakes. In the end it was probably their most embarrassing display.

Dianna’s girls came out on the floor looking apprehensive about what they were supposed to do and they managed to talk themselves into second guessing every little thing.

So the team had to do well in Stand Battle. They had no room for mistakes and it was their reputations riding on the line. But, in spite of their best efforts and they were their best, the Dancing Dolls still did not place in the competition.

The girls literally walked away with nothing!