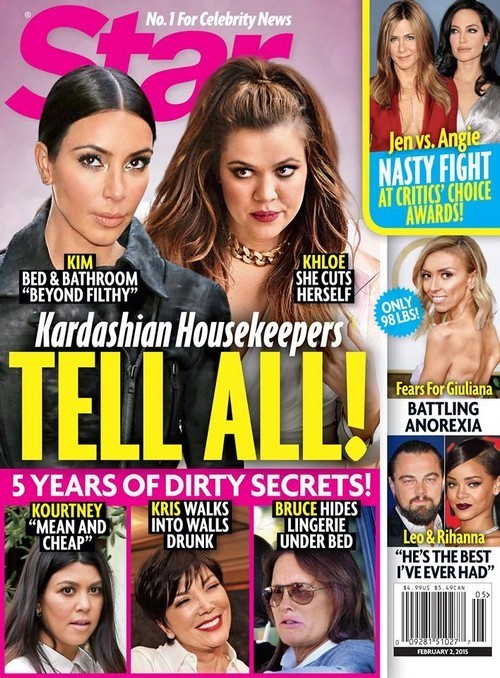 It’s probably not a surprise to anyone that the Kardashians still have dirty little secrets. Despite airing their dirty laundry all over Hollywood – thanks to their painful-to-watch reality show – the Kardashians, led by Kris Jenner, have managed to keep some of their deepest and darkest secrets under wrap. However, Kardashian housekeepers have spoken to Star Magazine in an exclusive, and they’re revealing all the secrets that the family has tried to keep hidden for the past five years in the shocking cover photo.

First things first, Kim Kardashian is reportedly disgustingly unclean, and keeps both her bathroom and bedroom ‘beyond filthy‘. No wonder Kanye West keeps leaving her to hang with his boy toys in Paris. But so far, nothing too scandalous, right? I mean, this is the same women that got famous off a sex tape, never forget.

Then, there’s Khloe Kardashian. According to the report, Khloe cuts herself every so often and hasn’t stopped, despite family pressure to go see a doctor. No doubt, her relationship issues with Lamar Odom and then French Montana may have played their part in that, but it’s concerning that the Kardashians haven’t tried to do more to help Khloe.

Then, there’s Kourtney Kardashian, who’s reportedly ‘mean and cheap‘. Of course she is! She’s a Kardashian! Being kind is against their base nature, and being cheap has been drilled into them by their mother, despite the fact that they make buckets and buckets of cash for doing nothing but famewhoring.

Then, Bruce Jenner apparently hides lingerie under his bed. While that same fact about anybody else might have been creepy, we know enough about Bruce Jenner’s sex change that it just seems unsurprising. The only real question is – when will Bruce go public with the aforementioned sex change?

Finally, we have the ringleader, Kris Jenner herself. So what’s the big secret the Kardashian housekeepers are revealing about her? Why, it’s not a secret at all. Apparently, Kris ‘walks into walls drunk’. Yes, Kris Jenner drinks a lot and is drunk a lot, which we can deduce from her behavior or even just tuning into Keeping Up With the Kardashians.

Overall, none of these were particularly shocking or scandalous, except perhaps for Khloe’s cutting herself. But then, Star also has a feature on Giuliana Rancic alleging that she’s battling anorexia right now. Well yeah.. has anybody looked at her lately?

Then, there’s also a story about Angelina Jolie’s showdown with Jennifer Aniston at the Critics Choice Awards, which isn’t necessarily accurate. All reports suggest that the two stars avoided each other like the plague, each sticking to their side of the room throughout the entirety of the program.

Finally, Leonardo DiCaprio and Rihanna hooked up, and Rihanna is reportedly bragging to all of her friends that Leo is the ‘best she’s ever had’. Um, I HIGHLY doubt that. It’s Rihanna! And Leo is notorious for sucking in bed, something his past lovers have even commented on.