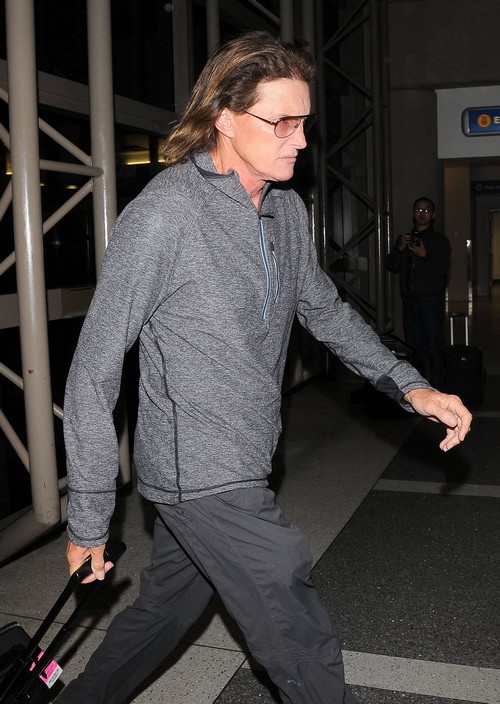 Just days before Bruce Jenner’s highly anticipated interview with Diane Sawyer, the father of six has been photographed outside of his Malibu home wearing a black and white striped dress. Jenner, who is currently 65 years old, was spotted on the patio of his Malibu mansion sporting s floor length dress, smoking a cigarette.

His interview with Diane Sawyer, in which many believe he will finally come out and announce his transition from a man to woman himself, is set to air on Friday, April 24. In a preview for the interview Bruce can be heard saying, “My whole life has been getting me ready for this,” with his hair pulled back in a ponytail.

Rumors began flying that Bruce Jenner was transitioning to a women when he finalized his divorce from Kris Jenner. He began making major changes to his appearance, including growing out his hair, and wearing lipstick in public. Bruce was also once spotted wearing pink nail polish.

These recent photos make it impossible to deny the fact that Bruce is making the transition, despite efforts from the family and himself to keep everything a secret until the actual interview. These last six months have not been easy for the former Olympic athlete. In addition to going through a divorce and being criticized for his alleged sex change, Bruce was also responsible in a fatal car accident.

Now, with everything set to hit the public on Friday, April 24, we can only imagine that Bruce is feeling even more stressed. At least he was able to divorce that tyrant of a wife, Kris Jenner. What do you think of these new photos? Do you agree with Bruce Jenner’s new lifestyle, or are you confused as to why he waited so long to make a rather big change in his life? Let us know in the comments below.